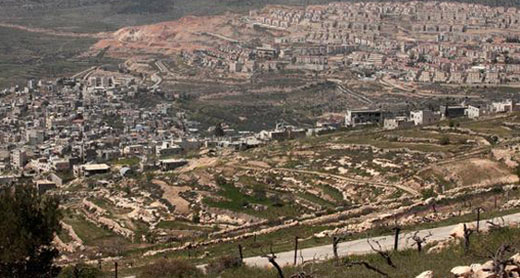 A view of Nahalin village, near Bethlehem.

BETHLEHEM, Wednesday, August 26, 2020 (WAFA) – Three Palestinian residents of the southern West Bank village of Nahalin were informed by the Israeli occupation authorities that their homes will be demolished and others ordered to stop construction on their homes, today said Nahalin mayor Subhi Zeidan.

He told WAFA that owners of the three houses, one of them two stories and the other two one floor, were given demolition orders by the Israeli military.

Two other residents were informed that the military is going to demolish retaining walls in their land.

Five other residents of the village were also ordered to stop work on the construction of their houses.

The Israeli occupation authorities seek to seize Nahalin village land for its illegal settlement activities in that area.