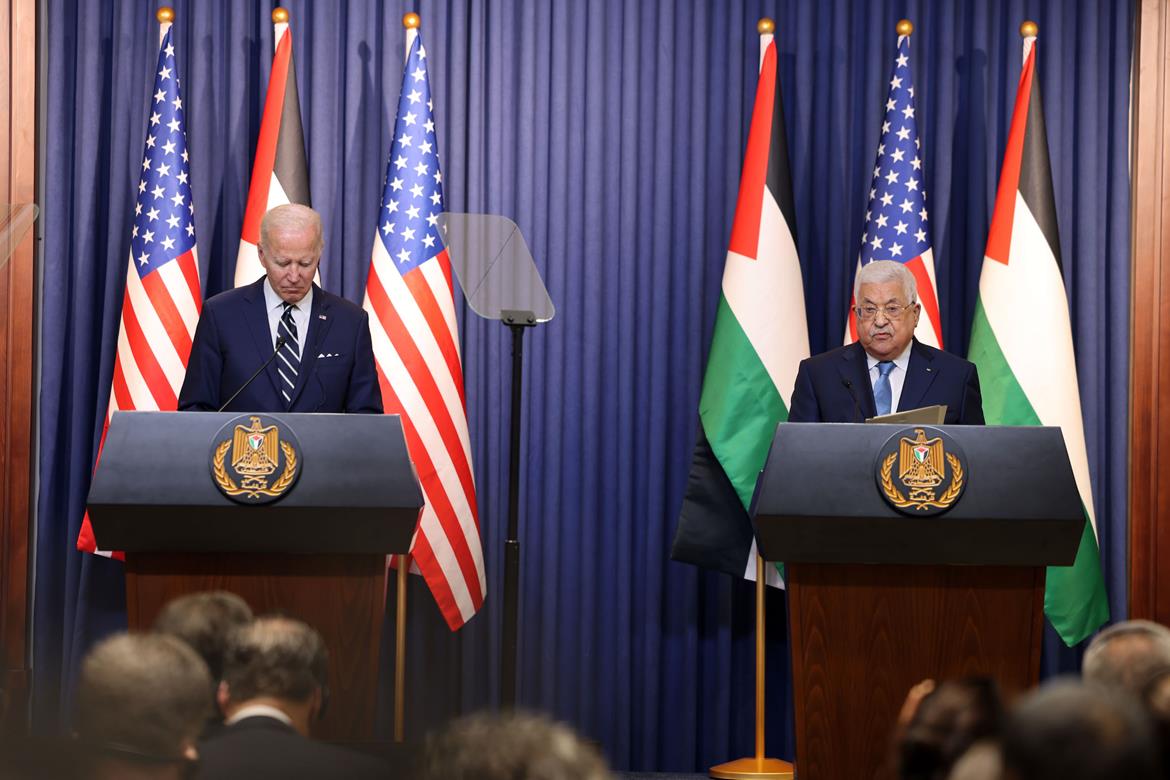 Speaking during a joint press conference with his US counterpart, Joe Biden, at the presidential headquarters in Bethlehem, President Abbas stated “After 74 years of the Nakba, displacement and occupation, is it not time for this occupation to end, for our steadfast people to gain their freedom and independence, and for the hopes of our young men and women, whom we cherish and trust and their creativity, to achieve in a promising future without occupation.”

“In this regard, we say The key to peace and security in our region begins with recognizing the State of Palestine, enabling the Palestinian people to obtain their legitimate rights in accordance with international legitimacy resolutions, and ending all permanent status issues, including the Palestinian refugee issue, and the way to that begins with ending the Israeli occupation of the land of the State of Palestine with East Jerusalem as its capital on the 1967 borders” he added.

He highlighted to President Biden the importance of restoring the foundations of the peace process based on the United Nations resolutions and the two-state solution on the 1967 borders.

Abbas renewed the call for President Biden to fulfill his promises with regards to reopening the US consulate in East Jerusalem, remove the PLO from the US terrorist list, and reopening the PLO office in Washington.

“We, for our part, are ready to work within the framework of partnership and cooperation in order to remove any obstacles to achieving that,” he added.

He urged the US to help “turn the page on the Israeli occupation of our land, end the acts of racial discrimination (Apartheid) against our people, and stop unilateral actions that undermine the two-state solution.”

He made reference to the killing of iconic Palestinian-American Al-Jazeera journalist Shireen Abu Akleh and called for the perpetrators to be held accountable.

Only if Israel ends its occupation of the territories of the State of Palestine, including East Jerusalem, it “will be accepted to live in peace, security and  good neighborhood with  countries and peoples of the region.”

“The opportunity for a two-state solution on the 1967 borders may be available today, and it may not remain for a long time,” Abbas said while pointing that he extends his hand for peace based on the UN resolutions and the Arab Peace Initiative.

During his speech, President Biden reiterated that his commitment to the goal of the two-state solution has not changed.

“Two states along the 1967 lines with mutually-agreed land swaps, remain the best way to achieve equal measure of security, prosperity, freedom and democracy for the Palestinians as well as Israelis,” he said.

He said that the Palestinian people deserve a state of their own that is independent, sovereign, viable and contiguous. “Two states for two people living side by side in peace and security. Both states respecting the equal rights of their citizens.”

He admitted that the goal of the two-state seems so far away and said that he felt the grief and frustration of the Palestinian people.

“There must be a political horizon that the Palestinian people can actually see or at least feel,” he added.

He expressed his country’s as well as his administration’s commitment to resuming that long-stalled “negotiations”.

While calling for an end to “violence”, he referred to the killing of Abu Aqleh, which he described as an “enormous loss to sharing with the world the story of the Palestinian people”, and reaffirmed his country’s insistence on a full and transparent inquiry into her death.

He called for preserving the status quo at the holy sites in Jerusalem under Jordan’s custodianship  as well as for freedom of worship in the occupied city.

Commenting on what he described as his country’s efforts to improving the daily life of the Palestinian people, he said that he resumed more 500 million in aid to Palestinians in 2021 and announced that the U.S. will provide additional 200 million to UNRWA

Commenting on talks with Israel on spurring Palestinian economic growth, he unveiled a plan to roll out infrastructure for 4G Internet across the Gaza Strip and West Bank by the end of next year, increase the supply of renewable energy, and improve freedom of movement of people and goods.

He expressed his hope that the visit will serve as the start of a new reinvigorated dialogue between PA and the U.S. and between the Palestinians and countries throughout the region.