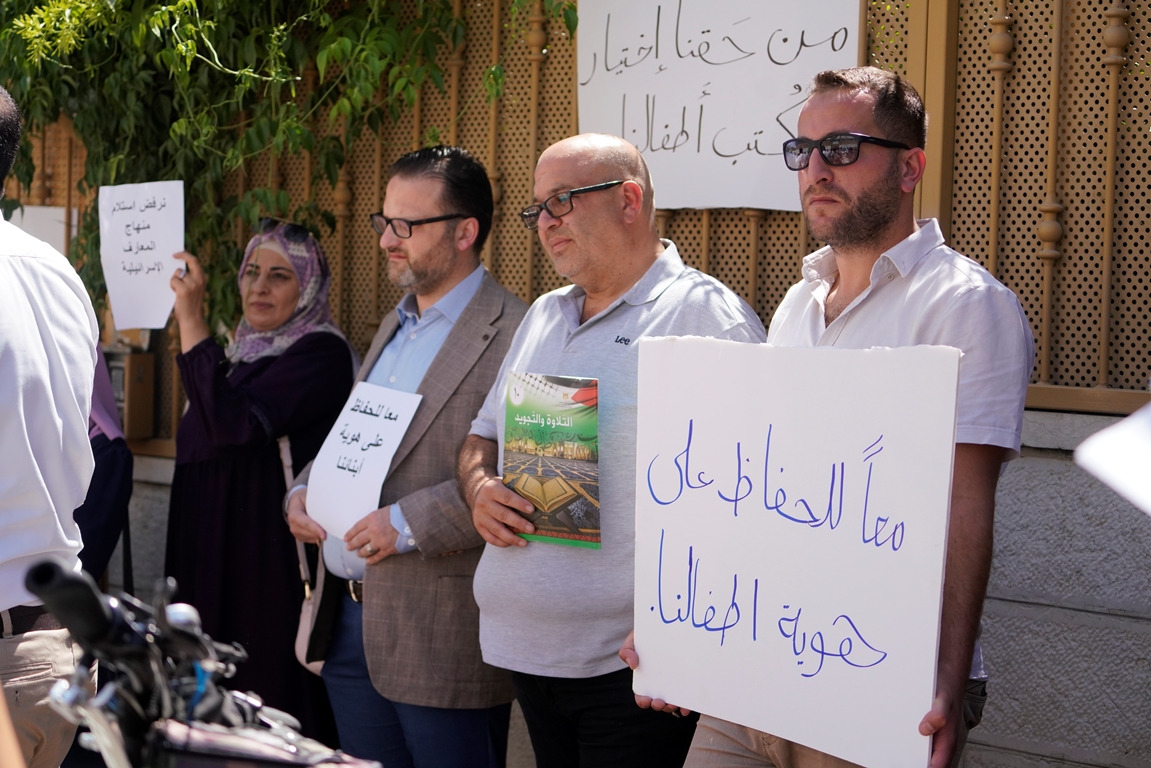 JERUSALEM, Saturday, September 17, 2022 (WAFA) – Palestinian parents and students in occupied East Jerusalem today held protests in several neighborhoods against attempts by the Israeli occupation authorities to prevent the school from teaching the official Palestinian textbooks and rather use the distorted Israeli-issued textbooks.

In Beit Hanina, scores of parents demonstrated outside the al-Eman Schools to express their rejection of the Israeli curriculum and affirm the right of their children to be taught the Palestinian one.

The protesters chanted slogans such as ‘no to the distorted curriculum,’ ‘no to Israelizing education’, and ‘we reject the curriculum of the Israeli Ministry of Education’.

They also chanted slogans decrying Israel’s disregard for the rights of the Palestinian students in occupied Jerusalem and the negligence of Palestinian schools, including Israel’s failure to provide maintenance to school buildings, as well as to build more school rooms to accommodate the natural population growth.

Ziad Shamali, a parent who spoke on behalf of other parents and himself, told WAFA that “the official and public position of the parents in Jerusalem is the complete rejection of teaching our children the Israeli curriculum or any other distorted one.”

"Parents insist on the right of their children to be taught the Palestinian curriculum, and that it is the only address for their children’s education," he added.

Umm Abdel-Rahman, a mother of three students, said: "Today we came to convey our message rejecting the Judaization of the Palestinian curricula, and our legal right and according to the Fourth Geneva Convention on War Zones, which stipulates that the people of war zones have the right of their children to be taught by teachers who share the same religion, language and culture."

Protests were also held in Silwan, Jabal al-Mukabber, Ras al-Amoud, and other schools around the occupied city.

Earlier this month, the Parents Committee, a body representing parents of Palestinian schoolchildren in occupied Jerusalem, said the Israeli authorities printed new textbooks similar to the ones provided by the Palestinian Ministry of Education but with alterations and omission of many facts, such as the Palestinian flag, national symbols, and other terms and historical facts, and replaced them with others in a way intended to deny the Palestinian students in occupied East Jerusalem the right to learn about their history, culture and the history of their city, Jerusalem, and country, Palestine.

The purpose behind this, said the Committee at the time, is to abolish the students’ Palestinian identity and sense of being a Palestinian Arab, in addition to falsifying and distorting the facts about Jerusalem in particular and Palestine in general.

The Israeli authorities have sent letters to Palestinian schools in East Jerusalem warning them that continuing to use the Palestinian textbooks in their original copy will lead to the suspension of their teaching license prompting some to alter their education plans and turn to the Israeli curriculum, while others decided to resist the Israeli plans.