Israeli government is fully responsible if situation explodes due to its policies in occupied Jerusalem, says PM Shtayyeh 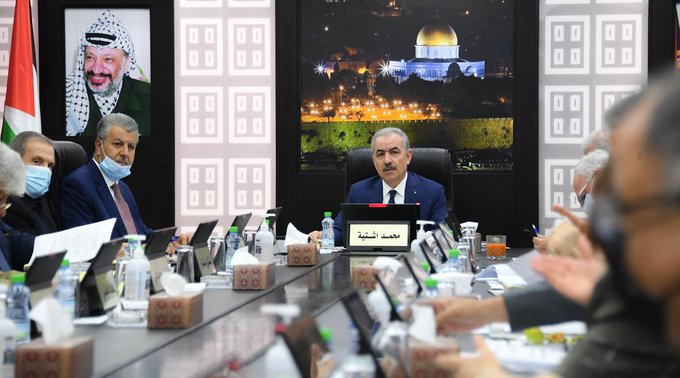 RAMALLAH, Monday, February 21, 2022 (WAFA)- The Israeli government will be fully responsible if the situation explodes in the occupied territories due to its policies in occupied Jerusalem, today said Prime Minister Mohammad Shtayyeh.

“Our people who are defending their homes in Sheikh Jarrah, Jabal al-Mukabber and Silwan neighborhoods (in occupied East Jerusalem) are subjected to the worst policies and practices of persecution, discrimination, and ethnic cleansing with the aim of dislodging them from their homes to replace them by settlers,” said PM Shtayyeh at the start of the weekly cabinet meeting held in Ramallah.

“We warn the occupation government against continuing its policies and we hold it fully responsible if the situation explodes,” he said, stressing that “our people in Jerusalem and everywhere will not capitulate to these policies, and will resist them with all force and determination.”

The Prime Minister said that the Israeli government's refusal to cooperate with the United Nations Human Rights Commission of Inquiry looking into crimes and violations committed against the Palestinian people and to prevent members of the commission from reaching Palestine “is condemned, and proves Israel's behavior as above international law and above the right of people to be independent and to progress. The world is required to consider Israel an apartheid state and an outlaw.”

He called on the United Nations organizations to shoulder their responsibilities to protect the rights and property of Palestinians in Jerusalem and everywhere after the Israeli government has passed a law to repeal the Absentee Property Law of 1950 as a prelude to passing legislation to seize Palestinian property since before 1948 and in East Jerusalem in order to hand them over to Israeli settlement organizations.

Shtayyeh said he values the decision of the Constitutional Court of South Africa, which ruled that anti-Zionism is not considered anti-Semitism, considering this ruling historic for standing up for the principles of human rights and protection for freedom of opinion and expression because it says that criticism of the Zionist movement or criticism of Israel as an apartheid state is not considered criticism or hatred of Jews.

“We call on the rest of the countries to adopt this decision as a reference and a legal precedent, and to stand against the occupation, regardless of the color or religion of the occupiers,” said the Prime Minister.