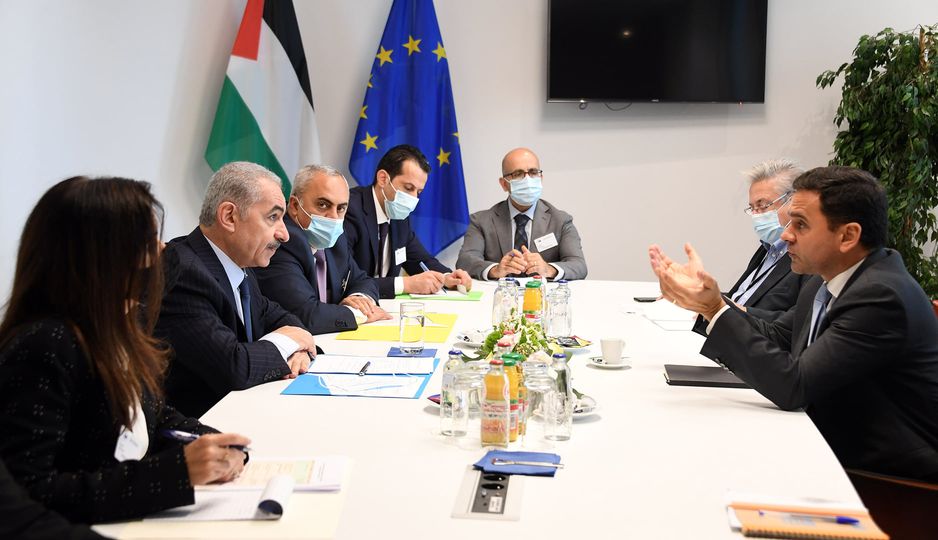 Prime Minister Shtayyeh meets with Pedro Marques, the Vice-president of the Group of the Progressive Alliance of Socialists & Democrats in the European Parliament, in Brussels.

BRUSSELS, Thursday, October 28, 2021 (WAFA) – Prime Minister Mohammad Shtayyeh Wednesday met with Pedro Marques, the Vice-president of the Group of the Progressive Alliance of Socialists & Democrats in the European Parliament, and other heads of committees in the Parliament in Brussels.

The Prime Minister confirmed Palestine's commitment to the principles and values of human rights, democracy, and pluralism, which it shares with the European Union.

In addition, the Prime Minister called for international protection for the Palestinian people facing relentless Israeli violations, the latest of which was the outrageous Israeli designation of six Palestinian human rights and civil institutions as "terrorist organizations."

He stressed the importance of dialogue with civil society institutions and the important role these institutions play in the absence of the Legislative Council due to Israel's prevention of holding elections in Jerusalem.

The meeting was held in the attendance of Abd al-Rahim al-Farra, the Ambassador of the State of Palestine to the European Union, Belgium, and Luxembourg.