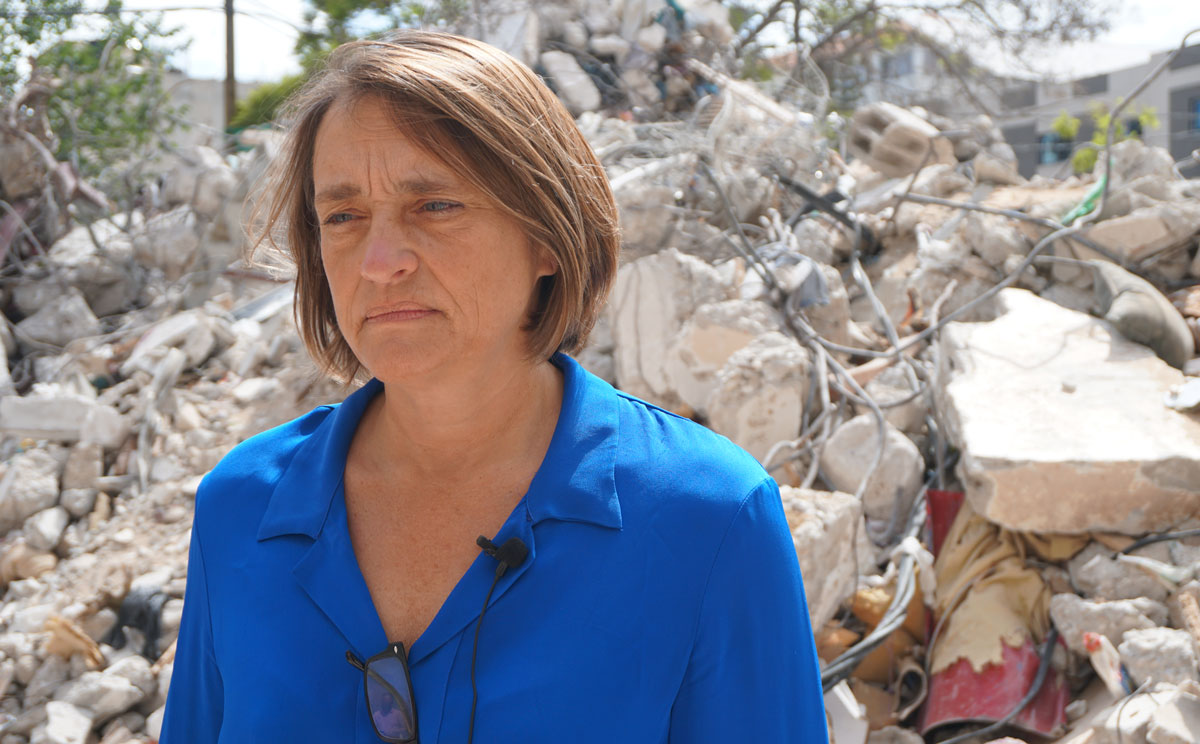 Humanitarian Coordinator Lynn Hastings during a visit to Gaza.

“Urgent efforts to improve the situation in Gaza must move forward swiftly, but let us not lose sight of the broader goal: resolving the Israeli-Palestinian conflict, ending the occupation and realizing a two-State solution on the basis of UN resolutions, international law and bilateral agreements”, she said, speaking from Jerusalem.

Hastings told ambassadors that the damage from 11 days of Israeli strikes on Gaza is estimated at between $290 million to $380 million, according to an assessment by the World Bank and the European Union. Economic losses are projected at nearly $200 million.

Gaza’s social sector was hit hard, weakening the safety net for the most vulnerable residents, while the immediate and short-term recovery and reconstruction could cost up to $485 million.

“International efforts – coordinated by the United Nations – to implement the humanitarian response and stabilize the situation on the ground in Gaza are well underway”, said Hastings, who is also the UN Resident Coordinator and Humanitarian Coordinator in the Middle East.

“Thus far, some $45 million of a requested $95 million has been raised for the consolidated humanitarian flash appeal published by the UN in May.”

Hasting underscored the readiness of the UN and partners to implement recovery and reconstruction initiatives, in coordination with the Israeli and Palestinian authorities, Egypt, Qatar and other regional and international entities.

She said that while Israel has allowed entry of some goods into the besieged Gaza Strip, including fuel for the Gaza Power Plant, it remains “essential that Israel implement additional measures to allow unhindered entry of all humanitarian assistance, including materials to implement the 2021 Humanitarian Response Plan and the Flash Appeal.”

Without regular and predictable entry of goods into Gaza, response would be at risk, she said, and livelihoods, as well as the wider economy, would be affected. Improved movement and access is also critical for any durable stability.

“Looking ahead, and with additional donor support, existing UN humanitarian cash assistance or other programs could quickly be scaled up to reach tens or hundreds of thousands of Palestinians in Gaza,” she said.

“While urgent humanitarian interventions can provide crucial relief in the short-term, any sustainable future in Gaza requires political solutions. I again reiterate the need for the return of a legitimate Palestinian Government to the Strip.”

Turning to related matters, Hastings highlighted the financial situation at the UN agency that assists the Palestinian people, UNRWA, which is facing a $100 million shortfall.

The cash flow crisis could affect the re-opening of school for half a million children in Gaza, and undermine humanitarian and early recovery programs there.

“I appeal once again to all donors, including those from the Arab region, to sustain the funding levels of past years and advance disbursements of funds as much as possible to avoid a disruption of essential services and humanitarian aid”, she said.