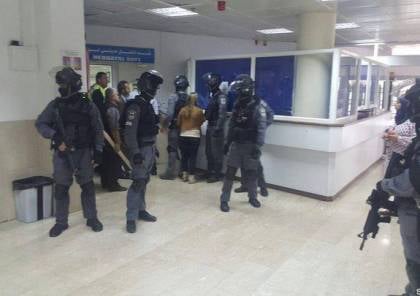 They said that Israeli police and intelligence officers, including at least a masked officer, forced their way into the hospital and occupied its rooftops as they harassed and interrogated the medical staff.

This came two days after the hospital, considered one of the oldest and largest hospitals serving Palestinians across Gaza and Jerusalem, issued a direct appeal for support following weeks of police violent crackdown on Palestinians in Jerusalem as well as others parts of the occupied territories and Palestinian towns and cities inside Israel who took to the streets in denunciation of Israel’s brutal occupation and settler-colonialism, particularly encroachments upon Al-Aqsa Mosque compound during the holy month of Ramadan, the forced expulsions of Palestinian families from Sheikh Jarrah, the onslaught on Gaza in addition to settler mob violence.

“We are overwhelmed and have a shortfall that we can no longer manage. We are now having to directly request for urgent support. Our medical frontline teams are constantly treating injuries from Israeli aggression in Gaza, West Bank, and Jerusalem. This emergency direct appeal will fund medical aid, emergency psychological support, hygiene kits, pharmaceuticals, and other needs during crises in Al Makassed hospital,” the online appeal read.

The Palestinian Health Ministry said that the Israeli occupation forces killed at least 241 Palestinians and wounded some 7,800 others since May 5.

It elaborated that at least a Palestinian was killed and some 1,100 others were wounded during the same period. As part of the approximately 1,100 casualties, some 490 were evacuated to Palestinian health centers and hospitals for treatment, including 60 serious casualties, 204 medium injuries and 223 light injuries.