Argentinians rally in protest of Israeli onslaught on Gaza, ethnic cleansing of Palestinians 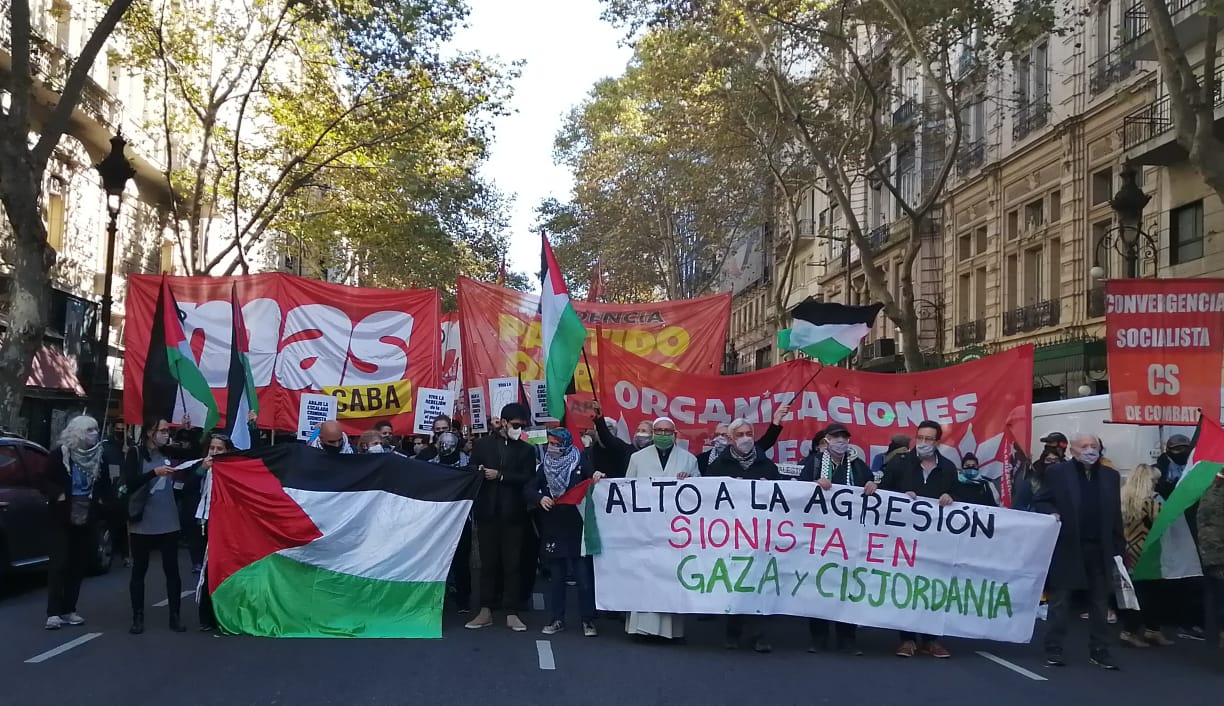 Argentinians march to the Israeli embassy in Buenos Aires

BUENOS AIRES, Tuesday, May 18, 2021 (WAFA) – Argentinians today marched to the Israeli embassy in Buenos Aires in condemnation of the relentless Israeli onslaught on Gaza that killed some 240 Palestinians and wounded 1,400 others.

Hundreds of protestors gathered outside the Israeli embassy in Argentina’s capital, Buenos Aires, to protest Israelis brutal occupation against the Palestinian people and the aggression on Gaza. The march was called by the Federation of Argentine Palestinian Entities.

The protesters carried placards reading “Boycott Israel”, “No to the Palestine genocide”, “Everybody with Palestine”. Other protestors held banners that called on the Argentinian government “to break relations with Israel”. However, the police blocked the protesters from reaching the Embassy office.

According to Resumen Latinoamericano news website, the declaration of the Federation was read during the protest  highlighting paragraphs of a communiqué sent by the Nobel Peace Prize winner, Adolfo Pérez Esquivel.

“Faced with this injustice and the advance of the colonial and racist position, which goes as far as ethnic cleansing, violating all international norms, we call on the governments and peoples of the world to stop this colonial advance in the 21st century. We cannot consider this implementation of a terrorist war as a confrontation, directed by a nuclear-armed power against an unarmed population,” one paragraph of the declaration read.

Journalist Carlos Aznárez, on behalf of the PLO-Resist and Fight, described the barbaric actions that the Israeli bombs and missiles are producing on Gaza and how in spite of this, the international community, the hegemonic media and many who look aside, continue talking about war, as if there were two equal sides.

"How many tanks do the Palestinian people have, how many planes, how many ships? The answer is simple: not a single one. The greatest weapon the Palestinian people have is their dignity as a people, their clinging to the land, their defense of homes and olive groves, despite the fact that they are destroyed time and again. And they have the enormous strength and the example of a united resistance that this time they are not willing to turn the other cheek,” he said.