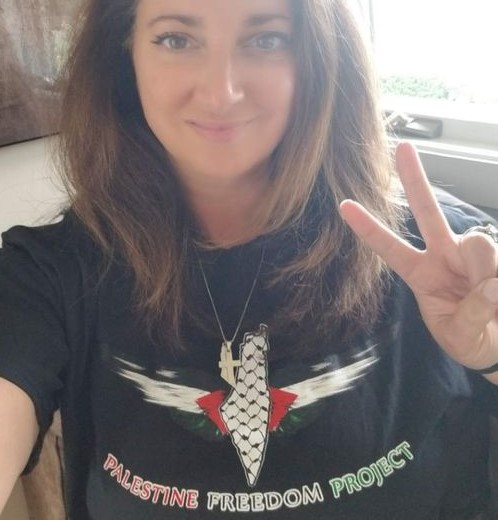 LOS ANGELES, Saturday, March 06, 2021 (WAFA) – A California judge rejected and dismissed on Wednesday a defamation lawsuit that attempted to silence and intimidate Suhair Nafal, a Palestinian-American activist, which was brought against her by a former Israeli soldier who claimed a Nafal Facebook post objecting to Israeli war crimes defamed and slandered her.

Rebecca Rumshiskaya, a former Israeli soldier, sued Nafal over a viral Facebook post she published in 2018 regarding the killing of Palestinian nurse Rozan Najjar at the hands of the Israeli army at a protest at the border in the Gaza Strip. Nafal posted an Israeli army ad featuring Rumshiskaya image as a recruitment tool next to Najjar’s image to make a comparison between them.

In September of 2020, Nafal contacted the American-Arab Anti-Discrimination Committee (ADC) for assistance after being served with a defamation lawsuit brought forward by the former Israeli army soldier. ADC asked attorney Haytham Faraj, an ADC National Board Member, to represent Nafal in this case.

The judge ruled against the former Israeli soldier, and in favor of Nafal. The judge also granted Nafal’s Anti-SLAPP Motion, awarding her legal fees, which must be paid by the plaintiff. Anti-SLAPP laws are intended to prevent people from using courts, and potential threats of a lawsuit, to intimidate people who are exercising their First Amendment rights.

The Judge’s decision and opinion is a categorical rejection of the attempt by Israelis and their American agents to silence American citizens’ rights to free speech, particularly political speech, ADC, which welcomed the ruling, said in a statement.

Reacting to the ruling, Nafal said, "As an activist for Palestine I'm very pleased with this decision. As an American, I'm appalled that foreign Israeli interests attempted to uproot the First amendment. I'm sure this won't be their last attempt, but we must all stand strong."

ADC National President Samer Khalaf stated, "We take any attempt at silencing our community members seriously. We will do our part to uphold the First Amendment rights of all our community members, including supporting BDS (Boycotted, Divestment, and Sanctions). We will not tolerate any entities, foreign or domestic, who aim at silencing our voices."

Attorney Haytham Faraj explained, "This is an important victory in preserving our communities’ First Amendment rights to free speech, including political speech. The judge made it abundantly clear that these attempts to silence and intimidate activists will be rejected. By granting Ms. Nafal the Anti-SLAPP , the judge sent a clear message that America is a country that tolerates and values diversity of opinions and political views, and those that seek to improperly silence political criticism will have a price to pay. America is not Israel. The former Israeli soldier who sued Ms. Nafal sought to have the court apply Israeli law which punishes criticism of Israel by up to one year in prison."

The former Israeli soldier was represented by a California law firm, whose primary work is focused on silencing and intimidating BDS activists, critics of Israeli human rights violations, and violations of International Humanitarian Law. The plaintiff claimed that Nafal’s Facebook posts defamed and slandered her. Further, the plaintiff asked the California court to apply Israeli defamation law, a request rejected by the court.