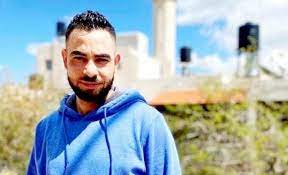 RAMALLAH, Monday, July 18, 2022 (WAFA) – Palestinian administrative detainee in Israel, Raed Rayyan, told the lawyer of the Prisoners and Ex-Prisoners Affairs Commission, Fawaz al-Shaludi, after visiting him in Ramle prison clinic that after 103 days of hunger strike his health condition has gravely deteriorated.

The Commission said today that Rayyan told its lawyer that he suffers from blurred vision, severe pain in the head and joints, and constantly feeling weak and tired. He can only sleep for very short periods and feels like vomiting. He also complains of cramps in his hands and feet, moves in a wheelchair, and has lost a lot of weight.

He said that he has recently been feeling high temperature in his body, especially in the hands and stomach, and that the doctor supervising his condition informed him that his body has begun to erode as a result of the long period of his strike.

Rayyan, 28, is from the town of Beit Doqqo, in the Jerusalem district. He has been detained since November 3 of last year and slammed with an administrative detention order for a period of six months, later renewed for a second period of six months. He had previously spent nearly 21 months in administrative detention. He went on hunger strike 103 days ago demanding an end to his long incarceration without charge or trial.

Another administrative detainee in Israel, Khalil Awawda, 40, from the town of Idna in the southern West Bank district of Hebron, resumed his hunger strike 16 days ago after having suspended it earlier, 111 days after he was promised to be released at the end of his detention period. But when the occupation authorities reneged on the promise to release him and issued a new administrative detention order against him for a period of four months, Awawda resumed his hunger strike.

Awawda, married with four children and detained since December 27 of last year, is currently kept in an Israeli hospital following a serious deterioration in his health due to the long period of his fast. He was slammed with an administrative detention order after his arrest for a period of six months, renewed for a second period of four months.