In 24 hours, a Palestinian family in East Jerusalem starts to self-demolish its home under Israeli pressure 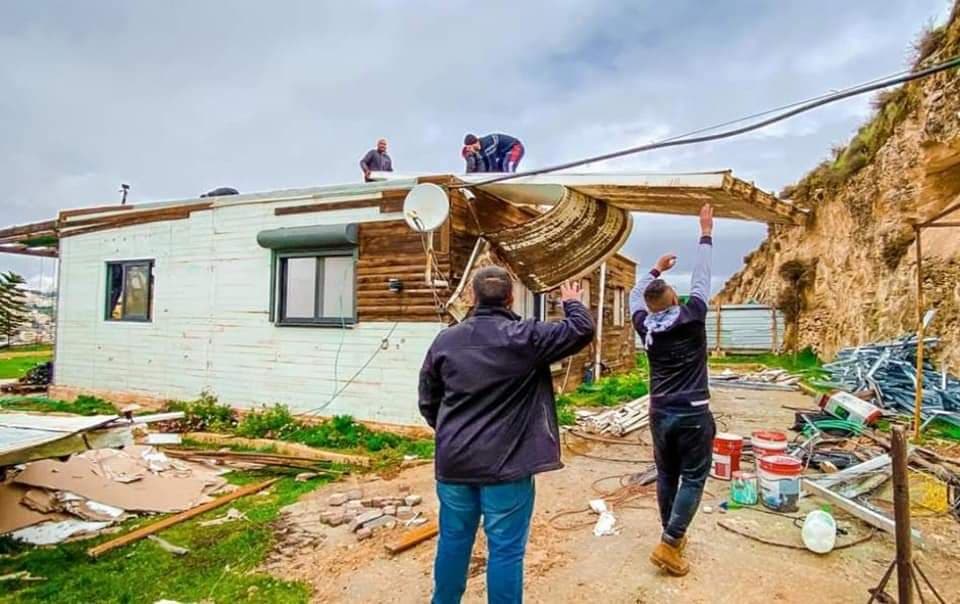 Iyad Abu Sneineh and his family gradually tearing down their house in Jabal al-Mukabber neighborhood of Jerusalem under pressure from the Israeli municipality.

JERUSALEM, Saturday, February 26, 2022 (WAFA) – A Palestinian family in Jabal al-Mukabber neighborhood of occupied East Jerusalem started yesterday to self-demolish its home under pressure from the Israeli municipality of West Jerusalem, which claimed the house was built without a permit, according to the house owner Iyad Abu Sneineh, the second self-demolition in the same neighborhood in the last 24 hours and the second for the same family in the last years.

Abu Sneineh told WAFA that the Israeli municipality ordered him to self-demolish his house, where six people live, otherwise he will be required to pay high costs if the demolition was carried out by the municipality.

This is the second time since 2015 the Abu Sneineh family has seen its home being demolished.

Abu Sneineh said the first time was in May 2015 when he received a demolition order against his home in Ras al-Amoud neighborhood for construction without a permit.

He said he refused to self-demolish his house then and was forced to pay tens of thousands of Israeli shekels in costs after the municipality proceeded to demolish it.

“This second time we are going to self-demolish our house to avoid paying high fines and costs imposed by the occupation municipality,” he said.

The family was seen yesterday removing furniture and other stuff from its house in order to start tearing it down today.

On Thursday, the family of Mahmoud Shqeirat also started to self-demolish its house in Jabal al-Mukabber under pressure from the Israeli municipality and to avoid paying high costs.

Jabal al-Mukabber residents held last several protests outside the West Jerusalem municipality against the home demolitions in their neighborhood and the refusal of the municipality to provide them with construction permits.

Palestinians say while the Israeli municipality and government build thousands of homes for Israelis in illegal settlements built on appropriated Palestinian land, it denies them building permits, accusing the Israeli municipality of discriminating against them as part of a general policy to reduce the number of Palestinians in the occupied section of the city while multiplying its Jewish settlers to change the demographic balance and further control the occupied city by changing facts on the ground.