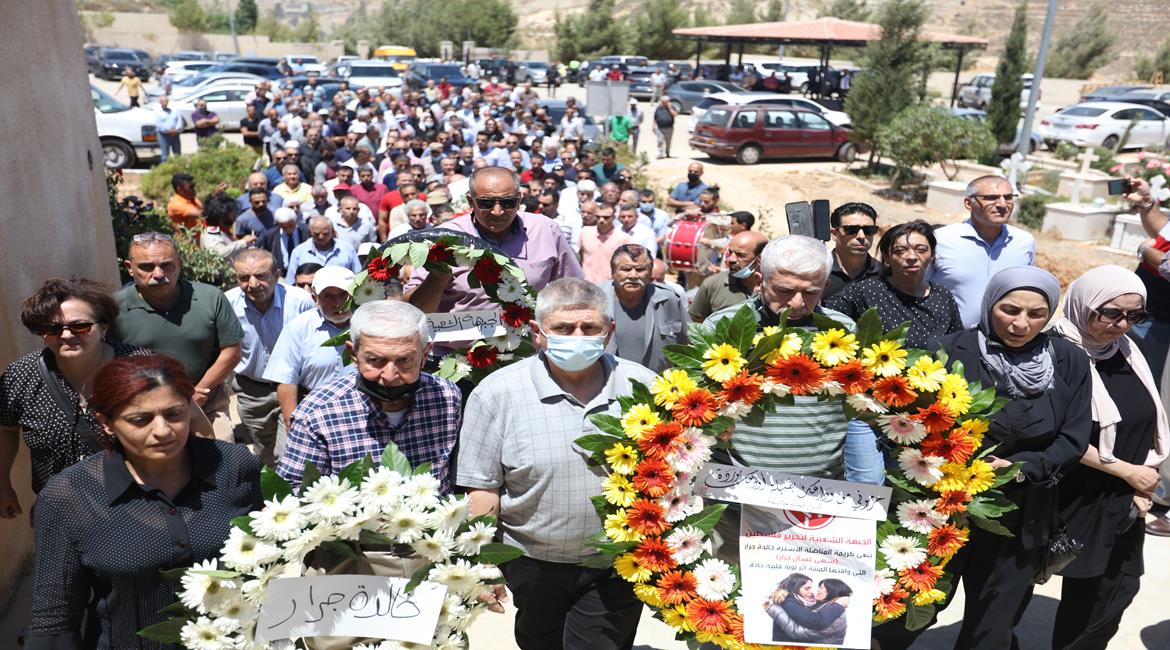 RAMALLAH, Tuesday, July 13, 2021 (WAFA) – Suha Ghassan Jarrar, 31, the deceased daughter of Khalida Jarrar, a former member of the Palestinian Legislative Council and a senior member of the Popular Front for the Liberation of Palestine who is incarcerated by Israel, was laid to rest today in Ramallah in the absence of her mother.

Jarrar, 31, a research and advocacy officer at Palestinian human rights organization al-Haq, died of a heart attack at her home in Ramallah on Sunday evening.

The Israel Prisons Service announced on Monday that it would not allow the mother, Khalida Jarrar, a jailed senior member of the Popular Front for the Liberation of Palestine (PFLP), to attend her daughter’s funeral.

Prior to that, rights groups, as well as Arab Israeli lawmakers, had asked Israeli Public Security Minister Omer Barlev to grant Jarrar a furlough to attend her daughter’s funeral. Dozens of demonstrators also protested for Jarrar’s release outside the Ofer military court on Monday evening.

In an obituary, Al-Haq said that Suha was "a fierce advocate for the rights of the Palestinian people to self-determination, freedom, and dignity".

Al-Haq said it sent an urgent appeal to the United Nations calling for the "immediate and unconditional" release of Jarrar from Israeli prisons to bid farewell to her daughter.

Jarrar is serving a two-year sentence over her membership of the Popular Front for Liberation of Palestine, and is due to be released in a few weeks.

The 58-year-old politican has been arrested numerous times and held in Israeli administrative detention, under which Palestinians from the West Bank and Gaza Strip are detained without charge or trial for a period of up to six months.

Jarrar was first arrested in 1989 and held for a month without trial. In her second detention in 2014, she was sentenced to 15 months in prison. She was eventually released in February 2019, before being arrested again nine months later.