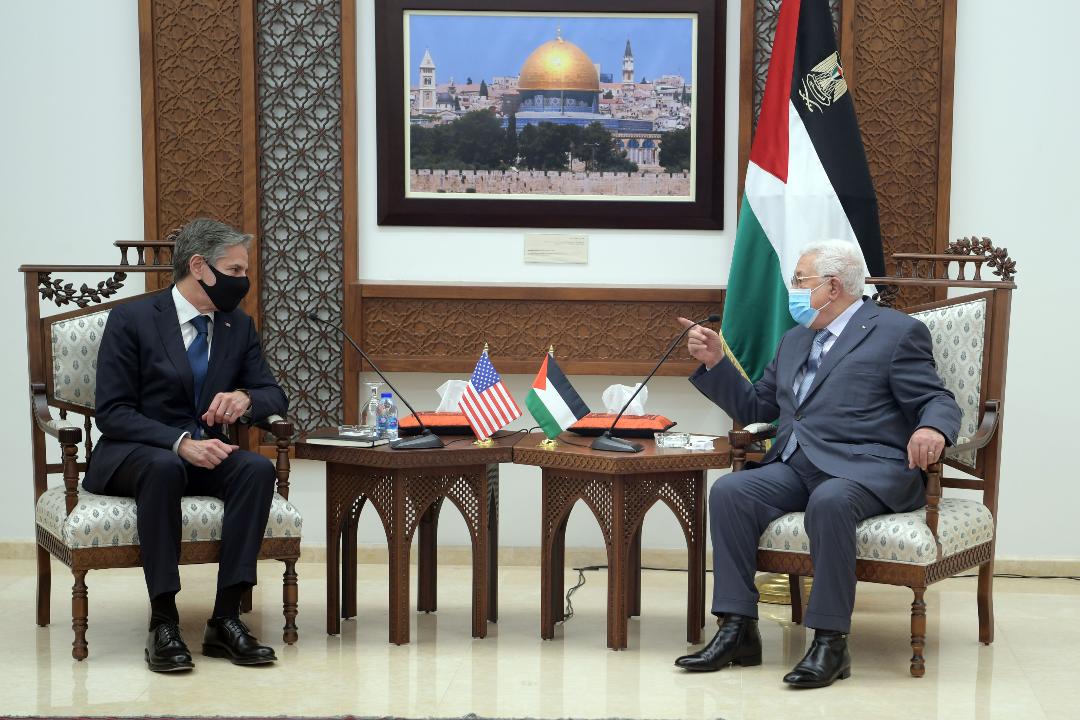 RAMALLAH, Tuesday, May 25, 2021 (WAFA) – President Mahmoud Abbas received today evening the US Secretary of State Antony Blinken in Ramallah, where they discussed the latest efforts to solidify the truce across the entire occupied Palestinian territories, including Jerusalem and Gaza.

President Abbas discussed during a meeting with the US Secretary of State Antony Blinken and the accompanying delegation at the presidential headquarters in Ramallah, efforts to reconstruct the devastated Gaza Strip following 11 days of Israeli onslaught, and ways to reach a political solution and to promote the US-Palestinian partnership.

President Abbas thanked the US administration, led by president Joe Biden, for the efforts it had made in close cooperation with Egypt and the Arab and relevant parties, to reach a cease-fire.

He stressed the need to continue working to ensure that the cease-fire includes putting an end to the ongoing Israeli forces and settler extremists’ attacks against Palestinian in Jerusalem, particularly against al-Aqsa mosque, preventing the forced expulsion of Palestinians from their homes in Jerusalem’s Sheikh Jarrah and Silwan neighborhoods, and the cessation of the arrest and detention of Palestinians, the demolition of homes, and the expropriation of Palestinian land for settlement activities.

He praised the US position that calls for respecting the legal status quo at al-Haram All-Sharif, which includes al-Aqsa Mosque and the Dome of the Rock in the Old City of Jerusalem, halting the forced expulsion of Palestinians from their homes in occupied Jerusalem, and not undertake any unilateral actions, including settlement expansion. He further praised the US administration’s adherence to the two-state solution in accordance with international law.

President Abbas briefed the US Secretary of State on the recent developments in occupied Palestinian Territories, underscoring the importance of US intervention to pressure Israel to stop its ongoing aggression in occupied Jerusalem, the West Bank, and Gaza, which he stressed undermine US efforts to solidify the cease-fire and de-escalate the situation, emphasizing the Palestinian side’s commitment to peaceful popular resistance and to repudiate all forms of violence.

The President praised Blinken’s announcement to reopen the Consulate General in Jerusalem and to provide $75 million for development assistance, in addition to $5 million in immediate disaster assistance for Gaza, and another $32 million for the United Nations Relief and Works Agency for Palestine refugees (UNRWA).

The president stressed that solidifying the truce is a significant step that paves the way for the prompt start of a political process that ends the Israeli occupation of the state of Palestine with East Jerusalem as its capital, under the supervision of the International Quartet and in line with international legitimacy resolutions.

He said that the Palestinian leadership will continue its efforts for the formation of a national consensus government that is committed to international legitimacy.

For his part, the US Secretary of State affirmed the importance of stabilizing the ceasefire and cooperating with the Palestinian Authority and the United Nations to support the reconstruction efforts in Gaza and create a political horizon that meets the aspirations of the Palestinians and Israelis and equally preserves their dignity, freedom, and security.

He reaffirmed the US position in support of the two-state solution, and preserving the status quo at al-Haram al-Shareef, and preventing the forced expulsion of Palestinians in Jerusalem, affirming the US administration’s commitment to strengthening bilateral relations with the Palestinian Authority and people.