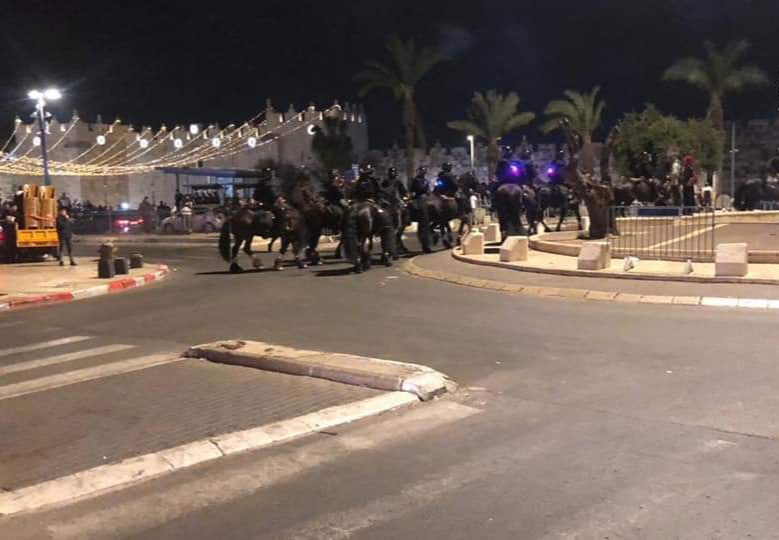 Dozens of Israeli Police officers on horseback getting ready to attack the worshipers at Damascus Gate in occupied Jerusalem, April 24, 2021.

JERUSALEM, Saturday, April 24, 2021 (WAFA) - Clashes renewed for the third night in a row today as Israeli occupation forces attacked hundreds of Palestinian worshipers, who were gathering at Damascus Gate plaza in the old city of the occupied capital Jerusalem for the daily Taraweeh prayers of Ramadan.

Police officers attacked the worshipers using teargas canisters, stun grenades and foul-smelling water cannons, as well chased them out of the plaza. Police also physically assaulted some of the worshipers as the former attempted to forcefully evacuate the worshipers out of the area.

No serious injuries were reported, and at least one worshiper was reportedly arrested.

The old city of Jerusalem has witnessed growing tensions since the beginning of the holy month of Ramadan, fueled by calls by Israeli far-right terror group Lehava upon Israeli settlers to attack the Old City of Jerusalem in order to "restore national honor".

Clashes and protests in support of the people of Jerusalem were also reported on Saturday night in many areas of the occupied West Bank.

In Jenin, north of the West Bank, a child was injured by live gunshots by Israeli occupation forces at Al-Jalama military checkpoint, north of the city, during a protest in solidarity with the people of Jerusalem.

In the village of Deir Sharaf, west of the city of Nablus, several cases of suffocation from gas inhalation were reported as Israeli occupation forces clamped down on a similar protest. A 15-year-old minor was reportedly arrested by the occupation army.