As Palestinians held a vigil on Nablus-area mountain to prevent takeover by settlers, soldiers attack them 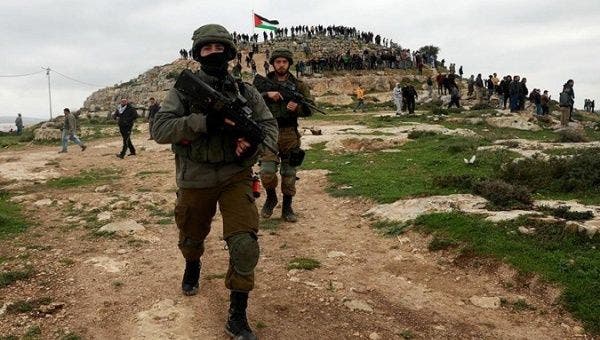 NABLUS, Tuesday, March 23, 2021 (WAFA) - A number of Palestinians were early this morning injured when Israeli soldiers attacked activists who were keeping vigil on a mountain known as Jabal al-Arma, in the town of Beita, south of the northern West Bank city of Nablus, to prevent its takeover by Israeli settlers, a local source said.

Monawar Bani Shamseh, a Beita activist, told WAFA that the Israeli occupation forces raided the mount early in the morning and attacked the activists who were keeping an all-night vigil on the mountain to prevent the settlers from reaching it. The soldiers used rubber bullets and teargas canisters to disperse the activists in an attempt to empty it of the Palestinians to allow the settlers free access to it, causing some light injuries.

Jabal al-Arma, which spreads over 250 dunums, is one of the most archeological sites in Nablus, and the highest peak in Beita.

Atop the mountain lie walls which indicate that an ancient castle was built there, under which seven water tanks were hewn into the rock.

However, such features make the mountain a prime target for Israeli settlers as colonial settlements are often positioned above water reserves, effectively stealing water as well as land.