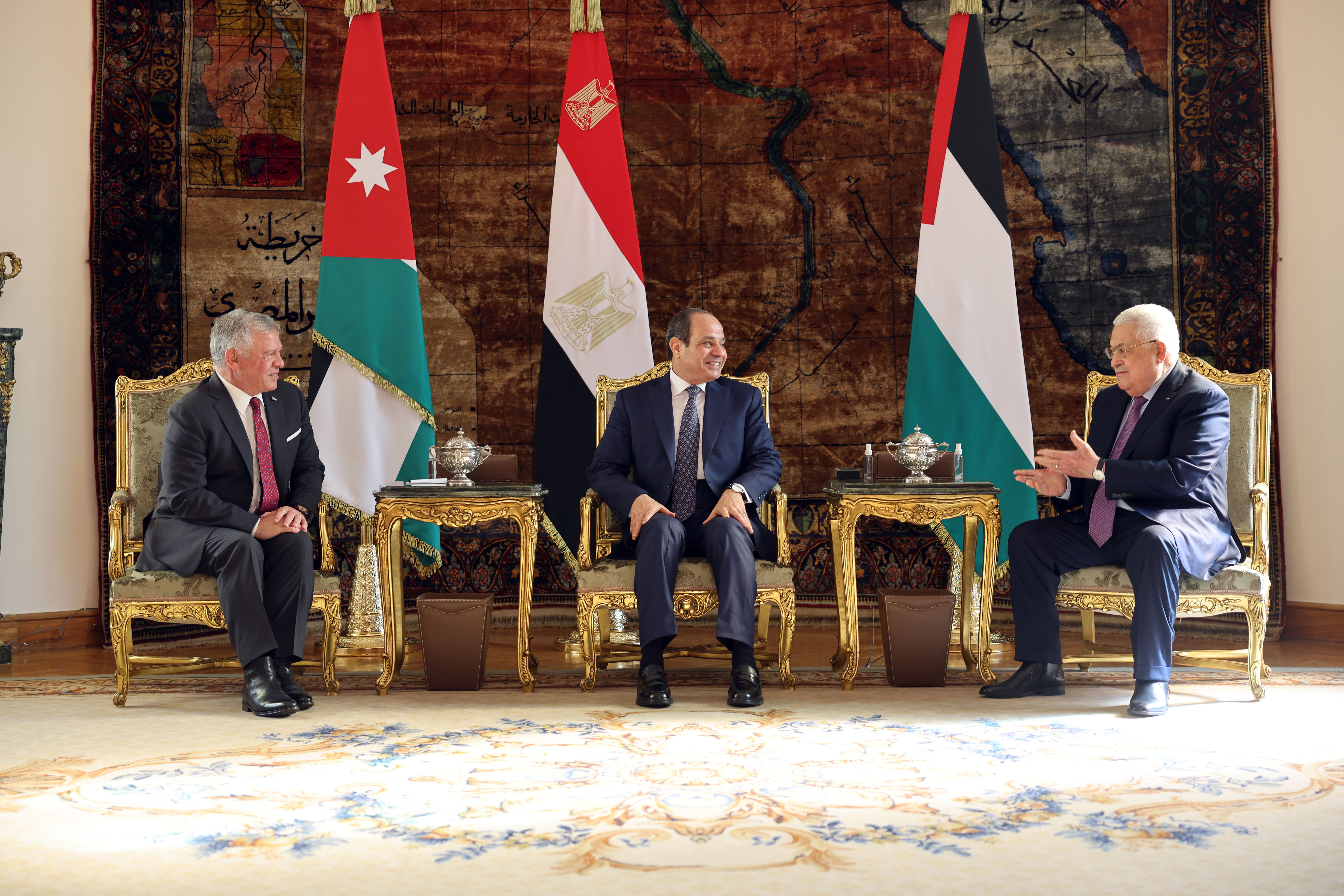 CAIRO, Tuesday, January 17, 2023 (WAFA) – The leaders of Palestine, Egypt and Jordan stressed today the necessity of preserving the legitimate Palestinian rights and ongoing joint efforts to achieve comprehensive peace, according to a statement by the Egyptian Presidency.

During a tripartite summit in the Egyptian capital, Cairo, President Mahmoud Abbas, his Egyptian counterpart Abdel-Fattah El-Sisi and Jordan’s King Abdullah II discussed the Palestinian cause as well as the recent developments at the regional and international arenas.

The leaders stressed the necessity of preserving the legitimate Palestinian rights and the continuation of their joint efforts to achieve a comprehensive, just and lasting peace based on the two-state solution.

This embodies the establishment of the independent and sovereign Palestinian state on the 1967 borders, with East Jerusalem as its capital, in accordance with international law, relevant international legitimacy resolutions and the Arab Peace Initiative, the statement said.

“President Sisi and King Abdullah affirmed their full support for the efforts of President Abbas in this delicate situation that the Palestinian cause is going through amid increasing regional and international challenges,” the statement added.

The leaders also stressed the need for the international community to provide protection for the Palestinian people and their legitimate rights, urging the international community to join efforts to find a real political horizon that would re-launch serious and effective negotiations to resolve the Palestinian issue on the basis of the two-state solution, cautioning of the danger posed by the continued absence of a political horizon and its repercussions on security and stability.

They also stressed the need to stop all illegal, unilateral Israeli measures that undermine the two-state solution and the prospects of achieving a just and comprehensive peace, including colonial settlement construction, land grab, home demolitions, the forceful displacement of Palestinians from their homes, ongoing Israeli incursions into Palestinian cities, and the violation of the historical and legal status quo in Jerusalem and its sanctities.

The leaders as well stressed the importance of preserving the existing historical and legal situation in Jerusalem and its Islamic and Christian sanctities, in a manner that guarantees respect for the fact that the blessed Al-Aqsa Mosque, with its entire area of 144 dunums, is purely a place of worship belonging for Muslims, and that the Jordanian Awqaf Ministry’s Department of Endowments of Jerusalem and the Affairs of the Al-Aqsa Mosque is the sole body authorized to manage the affairs of the Mosque and regulate entry into it.

They also emphasized the need to take serious and effective measures to alleviate the deteriorating living conditions of the Palestinian people in the besieged Gaza Strip.

In this context, King Abdullah II and President Abbas praised the Egyptian efforts exerted to maintain calm in the Gaza Strip and to rebuild the coastal enclave, reaffirming the responsibility of international donors in the efforts to reconstruct Gaza.

The leaders also stressed the importance of the international community to continue to support the United Nations Relief and Works Agency for Palestine Refugees (UNRWA), and the need to provide the financial support it needs to keep providing vital services to Palestinian refugees in accordance with its UN mandate, especially in light of the important humanitarian and development role that the UN agency plays in favor of the Palestinian people.

The leaders agreed to continue intensive consultation and coordination within the framework of the tripartite coordination formula at all levels in order to crystallize a vision to activate efforts to resume negotiations and to work with partners to revive the long-stalled peace process according to the approved terms of reference, with the ultimate goal of helping the Palestinian people obtain all their legitimate rights, mainly right to freedom, independence and establishment of a sovereign state on their national soil on the basis of the two-state solution.