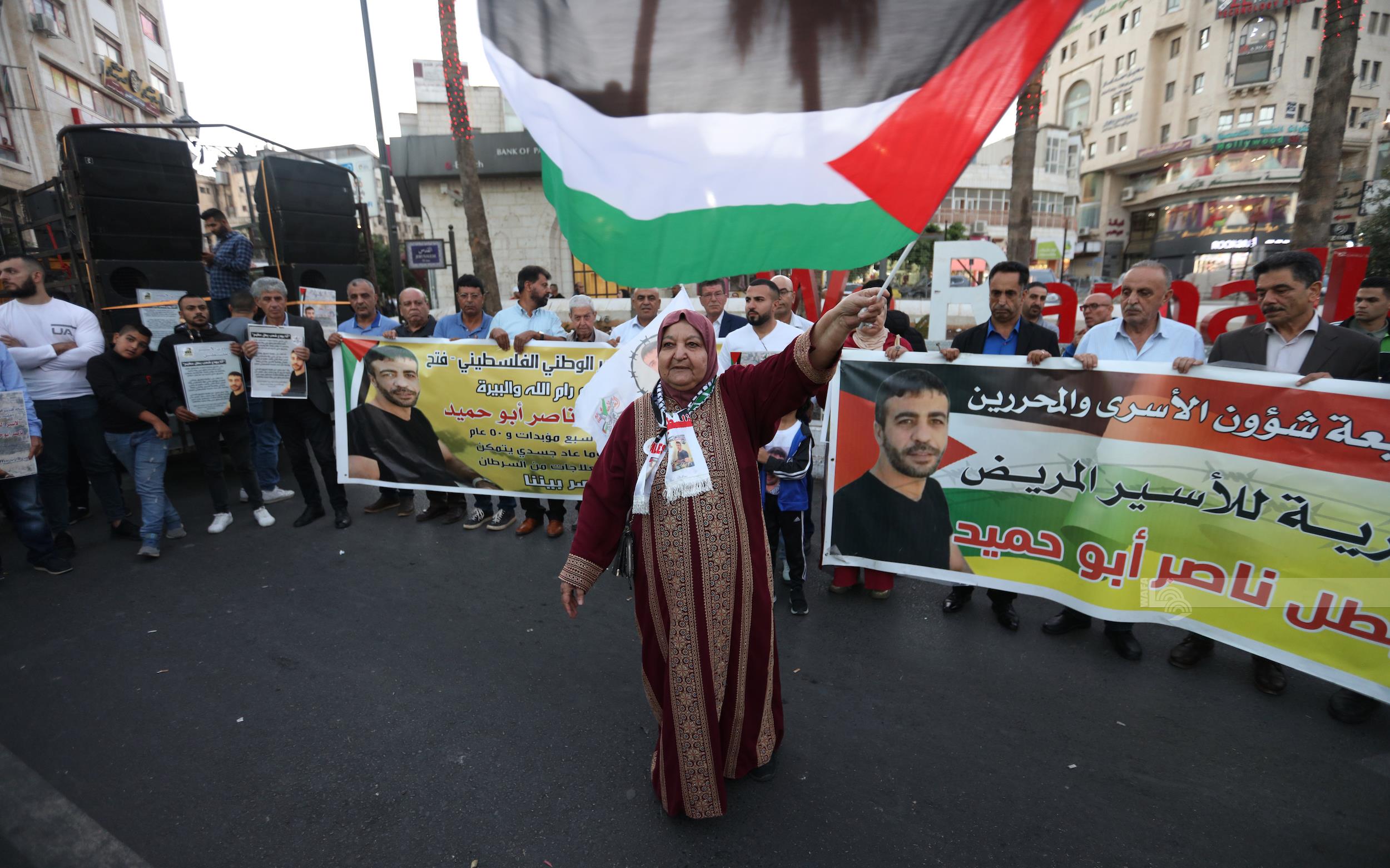 Palestinians marching in protest against medical negligence in Israeli prisons that led to the death of the freedom fighter Nasser Abu Hmaid. (WAFA Images)

TEL AVIV, Wednesday, December 21, 2022 (WAFA) – Israeli “Defense” Minister Benny Gantz Wednesday morning decided not to return the body of a veteran prisoner who died in Israeli custody to his family.

Israeli media reported that Gantz decided not to release the body of Nasser Abu Hmeid to his family, citing an assessment and a “previous security cabinet ruling” that allows Israel to withhold the bodies of Palestinian prisoners who die in imprisonment and those who are believed to have committed attacks for a potential prisoner exchange.

50-year-old Abu Hmaid died on Tuesday morning at the Assaf Harofeh Israeli hospital near Tel Aviv despite longstanding calls to release him due to the Israeli policy of deliberate medical negligence and slow killing following his late diagnosis with cancer more than a year ago.

He was transferred in a sudden manner on Monday afternoon from the Ramla prison clinic to the hospital after his health seriously deteriorated and he slipped into a coma.

Abu Hmeid’s family decided not to receive condolences from mourners unless after his body is released for burial.

A general strike was observed on Tuesday with stores, schools and businesses shut across the occupied West Bank to mourn Abu Hmaid’s death.

President Mahmoud Abbas said in a statement that Abu Hmaid died “as a result of the policy of deliberate medical negligence” and held the Israeli occupation authorities responsible.

Abu Hmaid was diagnosed with an advanced stage of lung cancer in August 2021 after Israeli authorities delayed the provision of medical examinations and treatment, according to Palestinian prisoner rights groups.

In a statement on Monday, the Palestinian Prisoners’ Society (PPS) said Israeli authorities “did not consider our requests for the release of the prisoner because of his difficult health condition”.

The PPS that 233 Palestinian prisoners have died in Israeli custody since the start of the Israeli occupation of the West Bank and the Gaza Strip in June 1967, including 74 who died due to medical negligence. The bodies of 11 prisoners are still withheld by the occupation authorities.

According to the latest figures from Addameer, the Palestinian Prisoner Support and Human Rights Association, there are currently 4,700 Palestinian prisoners in Israeli prisons and detention centers, including 150 children and 34 female prisoners. 600 prisoners suffer from diseases and require urgent medical care and treatment, including 24 prisoners who suffer from cancer and tumors of various degrees.

The Palestinian Ministry of Foreign Affairs and Expatriates condemned Israel's decision to withhold Abu Hmaid's body describing it as "persistence in its crime against him and a flagrant assault on the feelings of his mother, family, relatives, and millions of Palestinians."

It said that with this act, "Israel flouts international law, international legitimacy and all humanitarian and divine values and principles, as a form of internationally prohibited collective punishment."