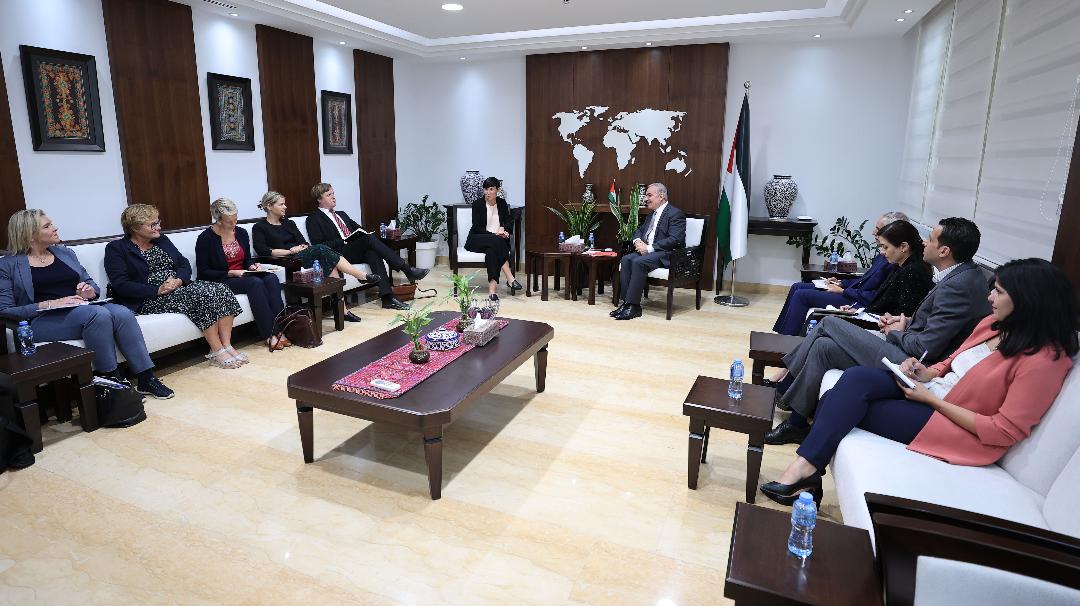 RAMALLAH, Tuesday, September 13, 2022 (WAFA) – Prime Minister Mohammad Shtayyeh today called on the Norwegian Parliament to exert pressure on their government toward recognizing the State of Palestine.

During a meeting in Ramallah with a delegation of 15 members of the Norwegian Parliament, headed by the Chairperson of the Standing Committee on Foreign Affairs and Defense Ine Eriksen Søreide, Shtayyeh stressed the need to work internationally to protect the eroding two-state solution in light of Israel’s continued settlement policy, extrajudicial killings, detentions, daily incursions, seizure of land, and the ongoing settlers’ violence carried out under the protection of the Israeli military.

The prime minister further stressed the importance of creating an environment that holds everyone accountable for their responsibilities in order to end the Israeli occupation and establish the State of Palestine, while urging not to merely settle for speaking of improving the Palestinian living condition, affirming that there is no alternative to creating a political horizon.

Shtayyeh called on the Norwegian Parliament to take serious actions against settlements; calling for not only labeling settlements’ products but also boycotting them along with the companies and institutions operating in Israeli settlements.

He also called for pressuring Israel to abide by the signed agreements that guarantee the right to hold Palestinian elections, including in Jerusalem, which he stressed is a national necessity that leads to Palestinian unity and the renewal of legitimacy.

The prime minister expressed his appreciation for Norway's continued support for the Palestinian people, at the political and financial levels, and its continued sponsorship of the donors' meeting.

For their part, the members of the Norwegian Parliament affirmed their country’s continuing support for the rights of the Palestinian people.