Japan contributes $1.5 million in food assistance for Palestine refugees in the Gaza Strip 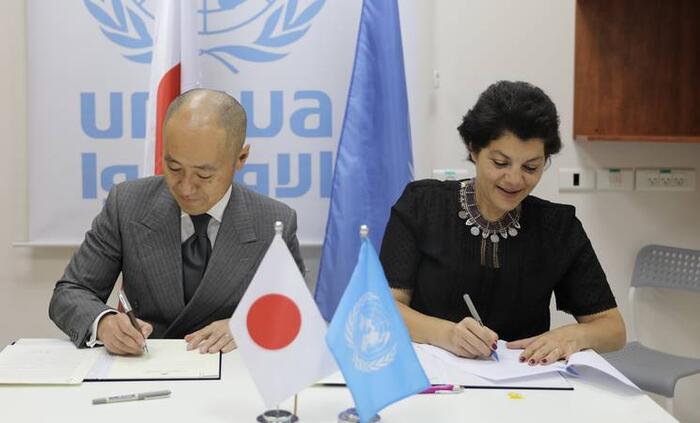 JERUSALEM, Friday, September 2, 2022 (WAFA) – The Government of Japan Wednesday signed a contribution agreement worth JYP 200,000,000 (approximately US$ 1.5 million) with the United Nations Relief and Works Agency for Palestine Refugees in the Near East (UNRWA), according to a press statement from the UN agency.

The UN agency said that this important contribution will allow it to continue offering essential in-kind food assistance to over one million Palestine refugees in the besieged Gaza Strip, rendered dependent on food aid by repeated cycles of conflict, the continuing blockade and the COVID-19 pandemic.

“I am very happy to share with you that the Government of Japan has decided to contribute JPY 200 million to UNRWA at this critical time. This contribution represents our determined commitment and continued solidarity with Palestine refugees,”Deputy Representative of Japan to Palestine, Takashi Hattori, said.

Welcoming Japan’s donation, UNRWA Director of External Relations and Communications, Tamara Alrifai, said: “This generous contribution from the Government of Japan is a proof that solidarity with Palestine refugees comes from near and far. UNRWA thanks Japan for its continued support, which allows for the provision of essential humanitarian support at a time of acute need.”

The Japanese donation will allow UNRWA to cover the cost of quarterly in-kind food assistance for 53,940 of the most vulnerable Palestine refugees. Over 68 per cent of households in the besieged Gaza Strip are severely or moderately food-insecure. Some 72 per cent of female adolescents in Gaza suffer from vitamin D deficiency, and 64 per cent suffer from vitamin A deficiency. Any disruption in the delivery of in-kind food assistance would risk further exacerbating these conditions.