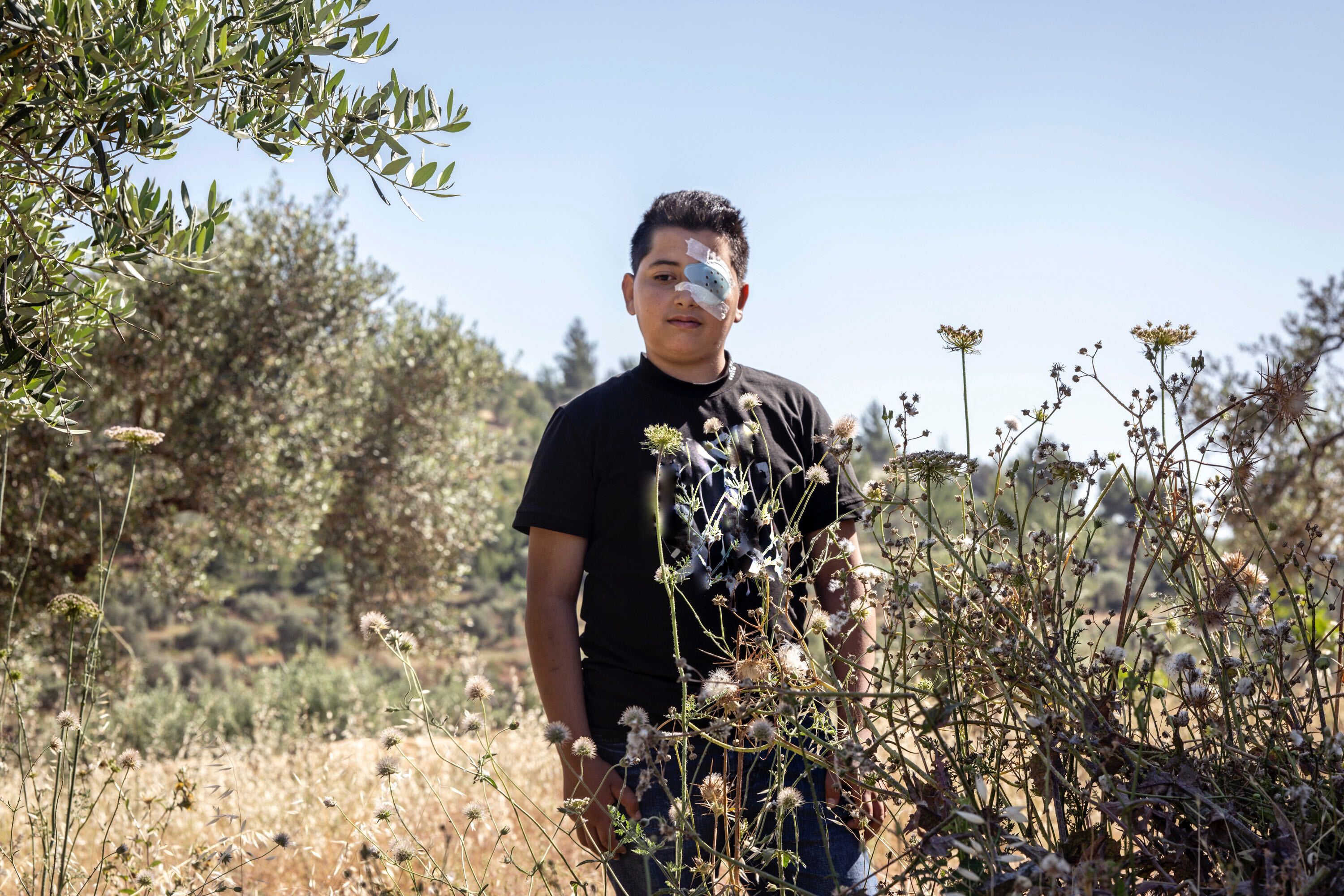 'I used to see with both of my eyes, now I only see with one eye,' says Rayan. (Photo credit: Tanya Habjouqa/ ICRC /West Bank)

JABAL SABIH, BEITA, Wednesday, August 3, 2022 (WAFA0 - Since May 2021, 10 Palestinians have been killed, including two children, and many were injured or left with disabilities as a result of confrontations in Jabal Sabih in Beita, south of the northern West Bank city of Nablus.

Amid attempts by Israeli settlers to re-establish an outpost -contrary to the law- on Jabal Sabih, Palestinian villagers have expressed their opposition in the form of marches and protests, bringing them into confrontations with the Israel occupation forces.

“Beita is home to 15,000 residents. Each household has gone through a misfortune over the last year. If you enter any house and ask what they've been through, it is either that they have lost someone, faced injury, or have someone in the family who is disabled or imprisoned,” explained Saeed Mohammad Ahmad Hamayil, whose 16-year-old son, Mohammad, was killed last June.

These are five testimonies collected in Beita about how their lives have changed since the confrontations started in 2021.

“We are building a new home because we cannot bear to stay in the house where our son lived. Everywhere I look, I see my son. It’s too painful. Each day that passes I feel like he has been killed anew, especially during this time because he would have been getting ready for his high school exams. Mohammad used to tell me, ‘I want to build a house and live here one day’. We want to make his wish come true.”

The new house will be closer to the cemetery, and this will somehow make Mohammad’s mother feel closer to her son.

“I was an employee in the Palestinian Ministry of Labor. I retired early because I could not go on with my work due to what is happening with me now. In 2021, my son was killed. So many children were killed.

“My son Mohammad was born on the 4th of August 2004. He was killed two months before turning 17. He was one of the smartest children in his school. He was sociable, loved people and had a charismatic personality. He would always gather the students and teachers around him. He dreamed of going to college and majoring in law. All his hopes and dreams are gone. Mohammad was very passionate. He was a writer, he loved writing.

“I can’t do anything to protect my children, I can’t even protect myself. How am I going to protect them? My son’s death broke me, his siblings and his mother. I’m trying to keep it together as I talk, but I can’t.

“I don’t want the crimes to be documented anymore; we have enough documents. We want these violent acts to stop. We are fathers; we feel and care for our sons.”

Testimony 2: He was my love

“My husband was an amazing father. Usually, villagers prefer boys, but he loved the girls so much. Of course, he was thrilled when his infant son Ali arrived, and for the two months he knew him before he was killed. But he was always so happy with his girls.

“He was a perfect man. He was a friend, brother, and husband, all in one. He was my love. We were married for 11 years. I can’t believe I have to live without him. But I have to be strong for my girls, I have no choice.

“I struggled to find work as a teacher, trying to provide for my children. I was used to being at home with my children. Now, I spend most of my day caring for others. I’m just in survival mode. There is no life without him.

“My eldest cannot speak about him. Until now, she won’t go to his grave. I try to get the girls to talk about their feelings, but they have trouble speaking about it.

“He had a nickname for each of his girls. He never got the chance to nickname his infant son. He called Alaa ‘his first and biggest joy’. He called our second daughter, Baylasan, ‘my bodyguard, my protector’ because she’s strong. Our third we called ‘harkoosha’ [‘gremlin’] because she’s a troublemaker. And Roaa was named ‘a little smurf’ because she’s tiny.

“His dream was for the girls to finish university. He expected Alaa to become a doctor and Baylasan an engineer. He wanted them to achieve big things in life. He cared deeply about their education. Him protesting on the mountain that day was also about protecting his family and the girls’ future.”

Testimony 3: We never left the mountain

“My name is Essa Hamdi Maali. I was born in 1954. I am married with nine daughters and two sons. I used to be a construction worker in Israel until the age of 45, when I came to Beita to cultivate my land. I lived a quiet life until the settlers came.

“The Beita protests involved the whole village; men, women, the elderly, and youth. We began our ‘nights of confusion’ as a form of protest – playing loud music and car horns over the loudspeakers turned towards our mountain and pointing laser lights at the settlement at night.

“We sat in the tents during the winter days and in Ramadan. Our shared demands brought us villagers closer together. For a hundred days, we never left the mountain.

“I’m tired. I can’t access my own land which I inherited from my grandfather and father. We are afraid that one day there won’t be land. We made a promise to protect the mountain. I have a recording of every tree to keep it for the memory. I had a little album. I know the names of all the plants here in Beita.”

Testimony 4: He is cautious to save his other eye

“It happened on a Thursday. We were sitting on the mountain, and suddenly something exploded in my face. I almost passed out, but then someone held me. I was in a lot of pain. I used to see with both of my eyes, now I only see with one eye. This is our land, and we will not abandon it. But it has changed my life forever,” said Rayan.

Rayan’s father added, “my son is 12 years old. He can’t see in his left eye at all. I was at work, preparing to go back home. My father called me, asking if I’d gone to the hospital. Rayan was not picking his phone up. So, I knew he was injured. They took him in a civilian car to the hospital. I saw him at the field clinic, then I took him to Rafidya Hospital, then to al-Najah Hospital in Nablus. I was shocked. These risks happen usually on Fridays, not Thursdays.

“Rayan suffers multiple injuries in his head, toe, and leg. He’s more upset now. He’s angry. Anything that he asks for, I give to him. I cannot hurt his feelings or say no to him. He is afraid now. He does not play with anyone at school anymore, he is cautious to save his other eye.”

Testimony 5: One year with no income – “I don’t know how we’re going to survive”

“My name is Nimer Suleiman. I was born in Beita. I have three sons and have been married for seven years.

“My father gave me this land, and I built my house from the income I earned from my work in construction. I kept saving up for five years while I was engaged. I used to work tirelessly to earn enough money to start a family.

“Since I built the house, I’ve had debts of about 20,000 shekels ($6,000). Since my injury, people have been asking for their money, and I have been asking them to be patient until I can return to work.

“I have not been able to work for the last year – that’s one year with no income. Sometimes, we can’t even put bread on the table. I keep borrowing money.

“The pain is unbearable. I live on painkillers. One bullet hit my thigh, the other is still in my body. The doctors say they cannot get it out as the risk of being paralyzed forever is too great.

“I can’t play with my children. When my son asked me to play ball, I tried but felt excruciating pain.

“I tried to work for two days; it was unbearable. My livelihood has been taken away from me.

“I want to protect my land and children’s future. We have nothing left because of the occupation.

“I used to work at the stone quarry in Beita, but the injury has completely destroyed me. When my kids ask me for things, I have to tell them I have nothing.

“It would be good to own a business – a small shop, grocery, or something to live off. My wife doesn’t have a diploma and doesn’t work. I don’t know how we’re going to survive.”