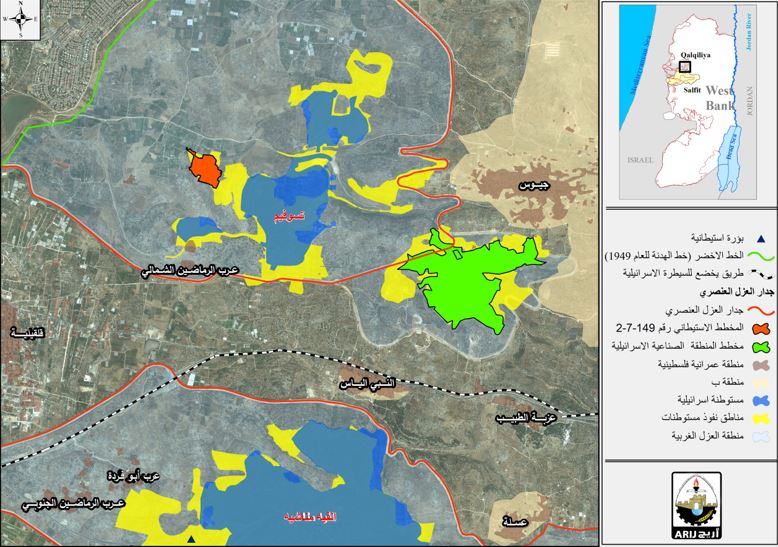 Map of land to be seized for settlement expansion near Qalqilya. (Credit: ARIJ)

QALQILyA, Thursday, July 14, 2022 (WAFA) – The Bethlehem-based Applied Research Institute–Jerusalem (ARIJ) said today that the Israeli occupation authorities recently approved a plan to seize 6,006 dunums of Palestinian land in the town of Jayyous, in the Qalqilya governorate, in order to establish a new settlement neighborhood in favor of the nearby illegal Israeli settlement of Zufim.

In a statement, ARIJ pointed out that the plan includes the construction of 92 new settlement housing units on the town's lands, and that the occupation authorities are considering changing the classification of those land from agricultural to residential and commercial.

According to the analysis conducted by ARIJ concerning the new Israeli settlement plan, it was found that the targeted Palestinian lands on which the new settlement neighborhood will be built are lands that the occupation has classified as part of the larger settlement area and under its influence, which means the land can be used for the future expansion of existing Israeli settlements.

There are over 600,000 colonial Israeli settlers living in Jewish-only settlements across the West Bank in violation of international law, particularly the Fourth Geneva Convention which expressly bans the relocation of the occupying nation's civilian population to the land of the occupied.