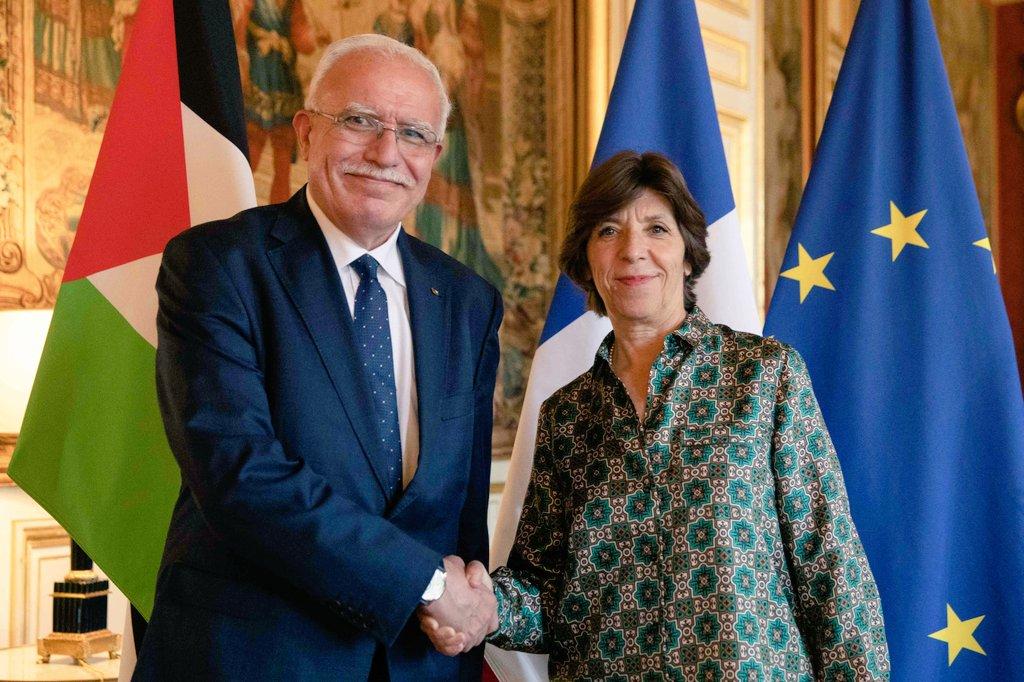 The foreign ministers of Palestine, Riyad Malki, and France, Catherine Colonna, during their meeting in Paris. (WAFA Images)

Malki briefed his French counterpart at the meeting held in Paris on the latest situation in the occupied Palestinian territories and the daily Israeli violations of Palestinian rights, particularly in occupied East Jerusalem, and the manifestation of the apartheid regime in Israel.

A statement by the Foreign Ministry said President Abbas will focus during his state visit to France and meetings there on what is expected from the French government regarding the peace process and pressuring Israel to stop its unilateral measures while committing to the signed agreements, as well as bilateral Palestinian-French relations and how to strengthen them.

Colonna, for her part, said France is ready to work with President Abbas to end the current stalemate in the peace process and that it will continue to support Palestine politically and financially through various development programs, as well as continuing to support the United Nations Relief and Works Agency for Palestine Refugees (UNRWA).

France is also committed, said the French Foreign Minister, to work within the European Union and the Security Council to push for a political solution or a political horizon that will allow a resumption of Palestinian-Israeli negotiations in accordance with the adopted international references.

The two sides also agreed, according to the statement by the Foreign Ministry, to continue bilateral consultations until the summit meeting between the Palestinian and French presidents on July 20 in order to ensure the highest degree of success of this summit and the practical steps that will emerge from it on many issues that have been agreed to be discussed and followed up bilaterally.