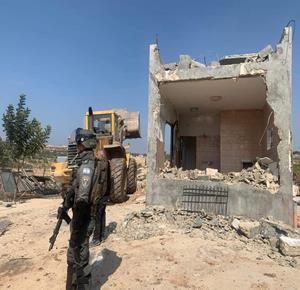 Demolition of a Palestinian-owned in Idna. (WAFA Images0

HEBRON, Wednesday, February 9, 2022 (WAFA) – A Palestinian homeowner said today that Israeli soldiers demolished his 75-square-meter house in the town of Idna, west of the southern West Bank city of Hebron, without prior notice.

Issam Tmeizi said he was surprised to see the soldiers at his house, located west of the town where the separation apartheid wall is built, and that they proceeded to demolish it without allowing him and his family to take out the furniture.

He said he received a demolition order two years ago but that there was no follow-up on it.

Several other houses in that area are also under threat of demolition.