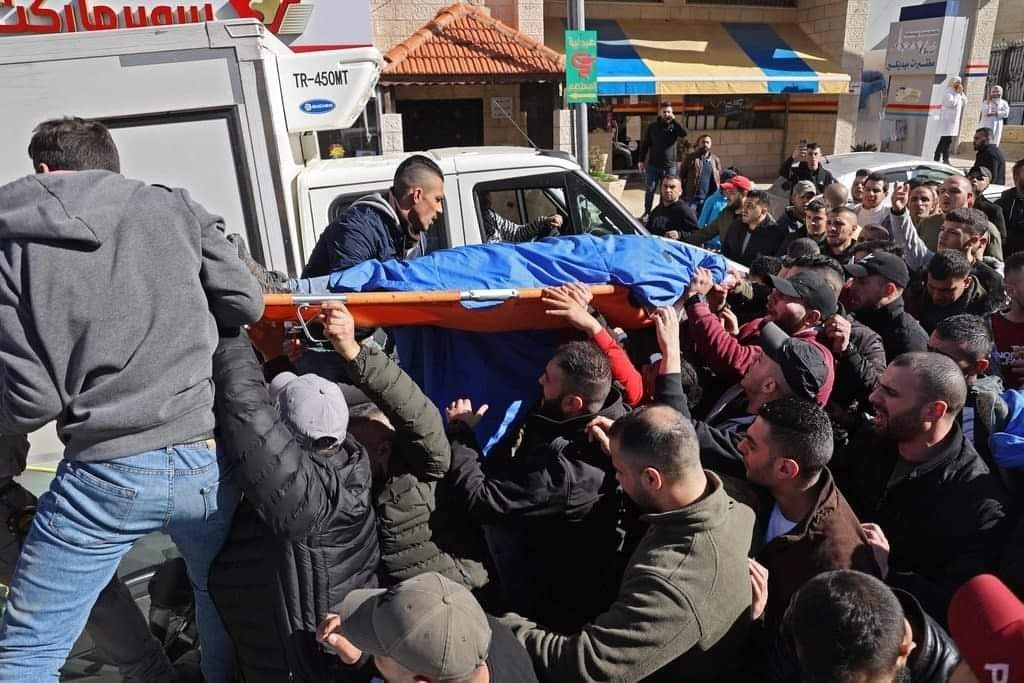 Palestinians carrying the body of one of the three Palestinians assassinated today by the Israeli army in Nablus.

RAMALLAH, Tuesday, February 8, 2022 (WAFA) – The Palestinian Cabinet and the Foreign Ministry today condemned in two separate statements the Israeli army assassination of three Palestinians in the northern West Bank city of Nablus and demanded an international investigation into the attack.

The cabinet, while meeting in Ramallah, issued a statement calling for an international investigation into what it described as “this heinous crime” and called on the United Nations and human rights organizations to condemn it.

Israeli soldiers earlier today opened fire at a Palestinian car in a Nablus neighborhood, in what was described as extrajudicial assassination, killing three of its passengers.

The Ministry of Foreign Affairs and Expatriates also condemn the assassination in a statement, holding the Israeli government and its prime minister, Neftali Bennett, “fully and directly responsible for this crime.”

It said the silence of the international community to Israeli violations and crimes provides a cover to these criminal acts and encourages the Israeli occupier to continue in its open warfare against the Palestinians.

The ministry called on the UN Secretary-General to shoulder his responsibilities and activate the international protection mechanism for the Palestinian people as per the UN General Assembly resolution, and called on the US administration to pressure the Israeli government to end its crimes.

It also called on the International Criminal Court to speed up its investigation of Israel and its crimes in the occupied Palestinian territory.