In September, eight Palestinian-owned structures in the occupied territories were demolished or seized by Israel 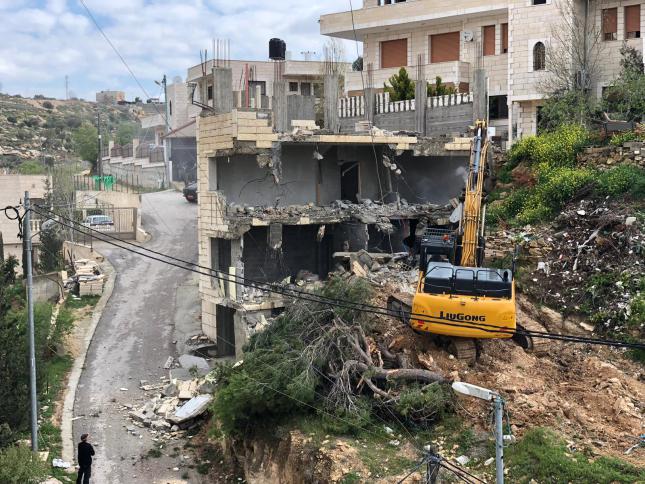 Demolition of a house in the West Bank. (File photo)

JERUSALEM, Tuesday, November 2, 2021 (WAFA) - In September, the Israeli occupation authorities demolished, forced people to demolish, or seized eight Palestinian-owned structures across the West Bank, including East Jerusalem. This resulted in the displacement of two people, and affected the livelihoods or access to services of about 50 others, according to the United Nations Office for the Coordination of Humanitarian Affairs (OCHA) in the occupied Palestinian territory monthly report on West Bank demolitions and displacement for the month of September.

All the structures were targeted due to the lack of building permits, which are nearly impossible for Palestinians to obtain in Area C of the West Bank and East Jerusalem, it said.

The number of structures demolished or seized, and people displaced in September was the lowest recorded since June 2017. The decline may be partially attributed to the Jewish holidays, said OCHA.

However, it added, the number of structures demolished or seized, and people displaced, so far in 2021 represents an increase of 21 and 28 percent respectively, compared with the equivalent figures in 2020. In 2021, 311 structures, or 56 percent of all structures targeted in Area C, have been seized without, or with very short, prior notice, utilizing various military orders, effectively preventing people from objecting in advance.

All the five structures in East Jerusalem were demolished by their owners, including two home extensions where an elderly woman and a girl were displaced.  The total number of such demolitions carried out by the owners since the beginning of the year in East Jerusalem has reached 68.

Owners demolish their own homes to avoid paying exorbitant costs for the Israeli municipality of West Jerusalem if it carries out the demolition itself.

No donated structure was demolished or seized in September, said OCHA. Nevertheless, the number of such assets demolished or confiscated has increased by almost 96 percent so far in 2021 compared with the equivalent period in 2020 (from 94 to 184). A renewed warning was issued against an EU-funded school, which remains under threat of demolition.

While no donated structures were demolished/seized in September in the context of Israel’s permit regime, some were destroyed during a mass settler attack in the Palestinian village of Umm Fagarah, in the Hebron district, on 28 September. This incident resulted in the injury of nearly 30 Palestinians and extensive property damage, including damage to donated solar panels, a water network, and other WASH materials provided by the EU or its member states.