Newspapers Review: The Biden win in the US and President Abbas sending congratulations focus of dailies 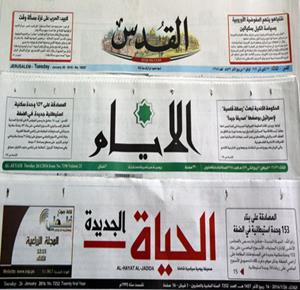 RAMALLAH, Monday, November 09, 2020 (WAFA) – The victory of Jo Biden in the run for president of the United States and reactions to it, including the congratulatory letter from President Mahmoud Abbas, were highlighted on the front page of the three Palestinian Arabic dailies published today.

“The President congratulates Biden on winning the elections: We are looking forward to working together for peace and stability in the region,” was the headline on the front-page story of the official al-Hayat al-Jadida daily.

The main front-page story in al-Ayyam said Biden, the winner, pledges to heal the US and defeated Trump resists calls to concede.

The same paper said while Palestinians were relieved with the defeat of Trump without pinning too much hope on the Biden administration, they also fear what would Trump do in the period before the new administration takes over.

Al-Quds daily said in its front-page story that as world leaders congratulate Biden on the win, the president-elect calls for national healing.

It included sidebars on the defeat of Donald Trump and the victory of Biden saying that Israeli Prime Minister Benjamin Netanyahu, a Trump crony, congratulated Biden after 12 hours of declaring him a winner.

In other news, the three papers reported on the Israeli army shooting and injuring of a Palestinian teacher in the West Bank.

Al-Hayat al-Jadida said a Palestinian citizen from the village of Burin has filed a lawsuit at a Nablus court against an Israeli settler who vandalized his home, a first of its kind.

The paper had a story on its front page about the difficulty faced by Palestinian students in the Jordan Valley, mainly in Khirbet al-Farisieh hamlet, as a result of Israeli army and settlers’ measures to deny them the right for education.

The three Palestinian dailies also reported today on coronavirus and its toll in Palestine, the region and the world.