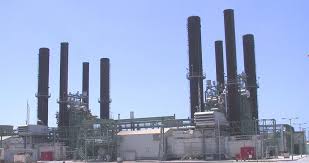 Gaza's only power plant came to a total halt in August due to an Israeli ban on entry of fuel into the besieged Gaza Strip.

GENEVA, Tuesday, September 01, 2020, (WAFA) – A United Nations human rights expert today expressed deep concerns about the recent rise in armed violence in Gaza, and has welcomed the announcement on Monday that Israel and Hamas have reached a truce to halt the current hostilities.

However, Michael Lynk, special rapporteur for the situation of human rights in the Palestinian territory occupied since 1967, cautioned that true peace, and the badly-needed reconstruction of Gaza, will only come with full respect of the fundamental rights of the two million Palestinians living there.

“Gaza has been reduced to a humanitarian whisper,” said Lynk. “Behind the current hostilities – the launching of rockets and incendiary balloons by Palestinian armed groups and the disproportionate use of targeted missile strikes by Israel – is the long-term impoverishment of Gaza by Israel’s 13-year-old comprehensive blockade. This amounts to collective punishment of the entire civilian population in Gaza, which adds immeasurably to the suffering of Gazans and wider tensions in the region.”

In August, Israel closed the fishing zone off Gaza, largely shuttered the Karem Abu Salem/Kerem Shalom crossing – the only commercial crossing into Gaza – and halted fuel supplies to the territory. This fuel embargo has caused Gaza’s sole power plant to shut down, reducing electricity availability to between four to six hours a day across the Strip and restricting operations at its sewage treatment plants, and diminishing the supply of water to homes.

“Instead of meaningful steps to end the blockade of Gaza to relieve civilians, Israel has maintained its tight grip. We are no longer on the edge of a humanitarian crisis, but in the middle of one. This is purely a human-made disaster, and could be quickly reversed if the political will existed,” said Lynk.

“This blockade has no meaningful security rationale,” he added. “It inflicts great misery on the two million civilians in Gaza while imposing little harm on any security targets. Israel remains the occupying power, and international law – including Article 33 of the Fourth Geneva Convention – strictly forbids the use of collective punishment by the occupier.”

As a result of this prolonged blockade, Gaza’s two million residents endure a collapsing health care system, undrinkable and unaffordable water, inadequate and sporadic power supplies, an economy on its back, deep poverty and among the world’s highest unemployment rates, said Lynk.

“Gaza is on the verge of becoming unlivable. There is no comparable situation in the world where a substantial population has endured such a permanent lockdown, largely unable to travel or trade, and controlled by an occupying power in breach of its solemn international human rights and humanitarian obligations. Our international standards of dignity and morality do not allow such experiments in human despair.”

An emerging concern is the new appearance of community transmission of Covid-19 in Gaza. Perversely, Gaza’s misfortune to be a blockaded territory has meant that, until now, the global pandemic has not entered the territory in any numbers.

“Should the Covid-19 pandemic take root in Gaza, the consequences would likely be very serious,” he said. “While the international community has been providing the medical supplies to deal with the pandemic, Gaza lacks the health care infrastructure – particularly regarding hospital capacity and the quantity of health professionals, testing kits and respiratory equipment – to manage a widespread outbreak. The cutting of fuel supplies by Israel throughout August makes a humanitarian crisis even worse.”

Lynk said what Gaza requires are not temporary band-aids but an end to the blockade – as repeatedly called for by the international community – and tools to chart the course to economic development and self-determination with the rest of Palestine. “Providing Gazans with hope for the future and a genuine path to prosperity and freedom will go a long way to answering Israel’s security concerns.”

Beyond lifting the blockade, he called for the construction of a Gaza seaport, building of new power, water and sewage treatment plants, access for the Palestinian Authority to the Gaza Marine natural gas field off Gaza’s coast, a substantial increase in export permits from Gaza and work permits in Israel, an industrial zone, the entry of much larger quantities of construction materials, and freedom of movement for Gazans.

“The announced truce has to be the first step towards the full realization of human rights in Gaza, and not another temporary step waiting for the next round of hostilities,” Lynk said.