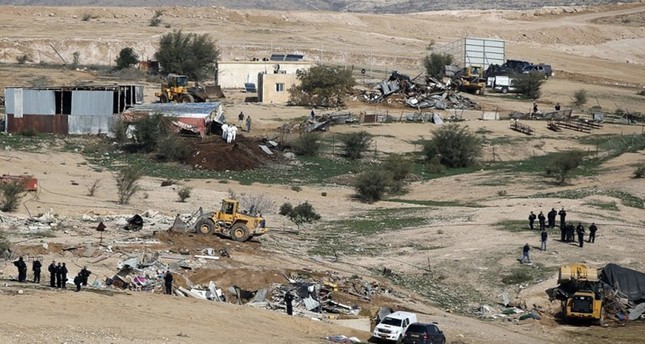 NAZARETH, Thursday, August 27, 2020 (WAFA) – The Israeli authorities today demolished all shelters in the Palestinian Bedouin village of al-Araqib in the Naqab desert in southern Israel for the 177th time since 2000 and for the sixth time this year, according to local sources.

Israeli police broke into the village and tore down the tents and tin structures, leaving the villagers, including children, homeless.

The village was last leveled on March 5, 2020, and every time the residents rebuild their tents and small houses, Israeli police return to raze them.

The village shelters, inhabited by Palestinian families, were built out of wood, plastic and corrugated iron.

Located in the Naqab desert, the village is one of 51 “unrecognized” Arab villages in the area and is constantly targeted for demolition ahead of plans to Judaize the Naqab by building homes for new Jewish communities. Israeli bulldozers, which Bedouins are charged for, have demolished everything, from the trees to the water tanks, but Bedouin residents have tried to rebuild it every time.

Bedouins in the Naqab, who are Israeli citizens, abide by the same laws as Jewish Israeli citizens. They pay taxes but do not enjoy the same rights and services as Jews in Israel and the state has repeatedly refused to connect their towns to the national water and electricity networks in an effort to end their presence in that area of the country.