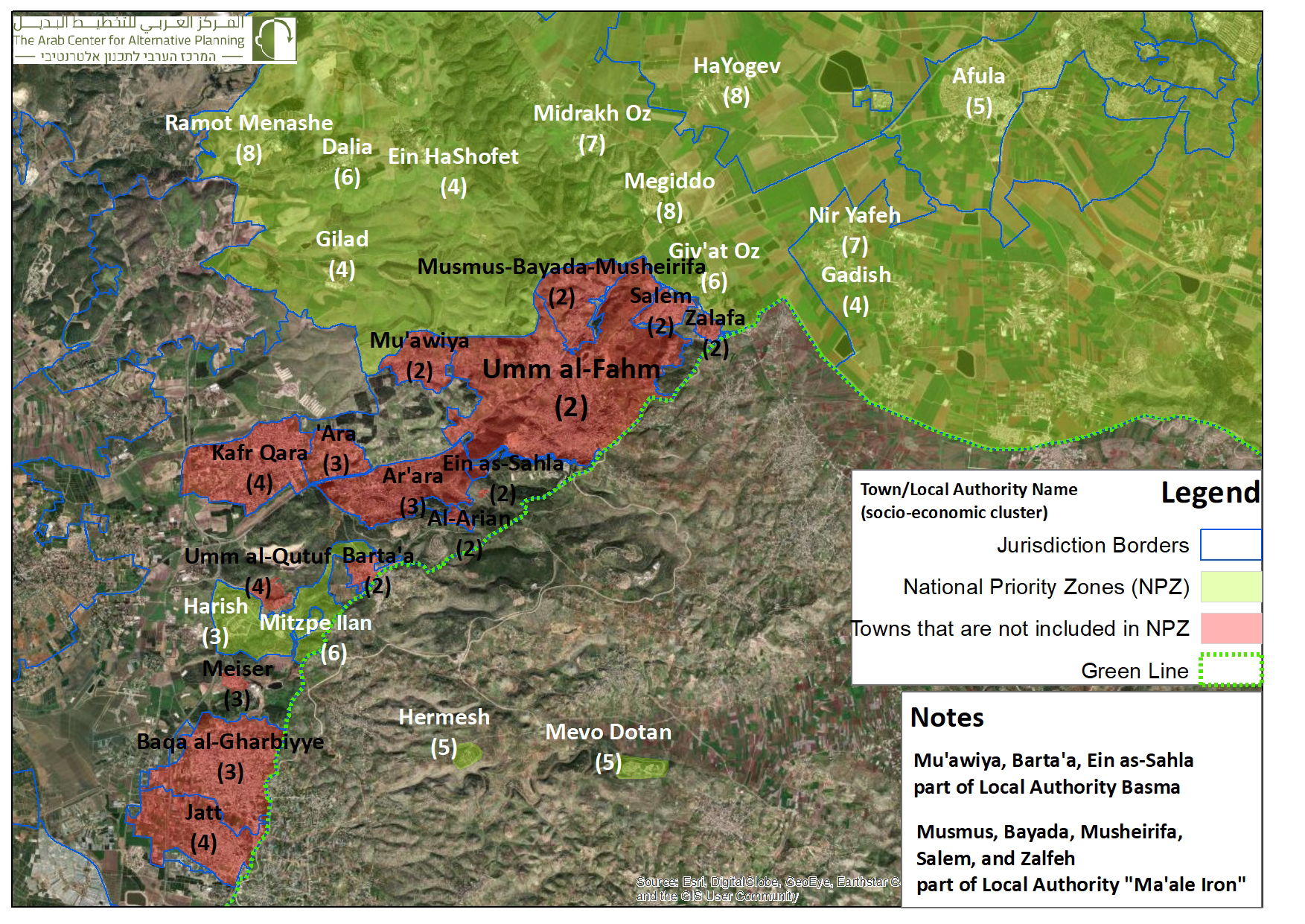 Map illustrating the towns in the petition. (Map courtesy of Adalah)

JERUSALEM, Thursday, August 6, 2020 (WAFA) - Adalah – The Legal Center for Arab Minority Rights in Israel, in cooperation with The Arab Center for Alternative Planning filed a petition to the Israeli Supreme Court today against an Israeli government policy discriminating against Arab communities in the “northern triangle” region in the distribution of housing, construction, and land development benefits.

The petition, according to an Adalah press release, was filed on behalf of all Arab local authorities in Wadi Ara and 74 area residents, in cooperation with the Public Committee for the Defense of Land and Housing in Wadi Ara, the petitioners' own localities, the local councils of Umm al-Fahm, Baqa al-Gharbiya, the Ara-Ar’ara, Kfar Qara, Ma'ale ‘Iron, Basmah and Jatt, and the communities of Umm al-Qatif, Misar, and Al-‘Iryan which have not received “National Priority Area” (NPA) designation that would make them eligible for development and housing benefits and land discounts from the Israel Land Authority.

The NPA benefits provided to those localities included in the government’s current arrangement significantly reduce their housing and new construction costs. These benefits include reduced land lease fees at a rate of up to 51 percent, as well as subsidies from Israel’s Construction and Housing Ministry for planning and development expenses related to new residential construction on state lands.

The petitioners argued that the government’s decisions on NPA eligibility do not comply with Israeli law regulating the classification of localities, said the press release.

This law was the result of a Supreme Court ruling in 2006 on a petition filed by Adalah on behalf of the High Follow-up Committee for Arab Citizens of Israel (HCJ 11163/03). In that case, the court rejected the Israeli government’s arbitrary determination of criteria that had previously resulted in discrimination between Arab and Jewish localities on the basis of ethnicity or national belonging.

The law authorizing the Israeli government to determine national priority areas includes adherence to the principle of equality and the prohibition against discrimination, and also gives significant weight to the criterion of socio-economic ranking and the communities’ economic and social resilience. The criteria are designed with the intention of reducing socio-economic disparities between communities, said Adalah.

Nevertheless, contrary to the clear language of the law, the Israeli government excluded Arab communities in the “northern triangle” area (Wadi Ara) from being classified as NPAs, despite their low socio-economic ranking. Although these towns were classified as being in the "social periphery", they are not defined as NPAs because they fall within the boundaries of the Khadera sub-district which has a higher ranking.

As a result, other neighboring – significantly wealthier – localities are entitled to NPA benefits, while the poorer localities, which have filed the Supreme Court petition, are being denied these benefits.

For example, Arab communities situated in the Ma'ale ‘Iron Local Council (Musmus, Zalafa, Musheirifa, Salem, and Bayada) and the city of Umm al-Fahm – which all have low socio-economic rankings – do not enjoy the state benefits provided to the nearby wealthier Jewish localities of Givat Oz, Megiddo, Mizpe Ilan, Harish, Mevo Dotan, and Hermesh.

This state discrimination comes against the backdrop of housing shortages and dysfunctional development in the northern triangle’s Arab communities. Along with the high population density, lack of urban planning, and shortage of available undeveloped lands, there also exists no development options that meet the needs of the population.

According to data in the petition, which was provided by The Arab Center for Alternative Planning, only 20 development tenders have been issued in the Wadi Ara area since 2010 – some 1,454 housing units – despite an estimated housing shortfall of 10,000 to 11,000.

In view of the Israeli government’s extreme violation of the law – and the concurrent violation of the principle of equality – the petitioners demanded that the Supreme Court cancel the relevant government decisions excluding the Arab communities or, alternatively, order the inclusion of Arab communities in the northern triangle amongst the list of localities designated as NPAs.

Adalah Attorney Suhad Bishara and Urban Planner Dr. Enaya Banna commented: “The Israeli government repeatedly creates mechanisms that systematically discriminate against Arab citizens. Through manipulations of various parameters, it formulates a policy with an outcome that is clear: the weakest communities – those which should have been at the top of the government's priorities – are excluded. It is also clear that the Israeli government has failed to abide by the Supreme Court's earlier ruling meant to put an end to this discriminatory practice. Many additional actions must be taken to resolve the land and planning crisis in Arab communities and to promote proper development that can facilitate social and economic prosperity.”