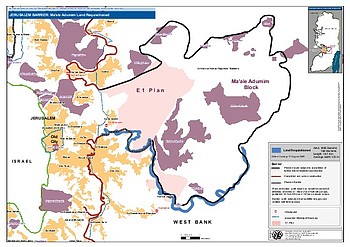 RAMALLAH, Sunday, August 02, 2020 (WAFA) – While welcoming a protest letter signed by European diplomats against Israel's plans to commence construction in an East Jerusalem area known as E1, the Palestine Liberation Organization (PLO) urged Europe to turn its words into action in order to deter Israel.

The European Union Representative as well as ambassadors of 15 European countries have submitted two days ago a protest letter to the Israeli Foreign Ministry regarding intention to start building in E1 area, east of occupied Jerusalem.

"We welcome the protest letter signed by European Ambassadors against Israel's plans to commence construction in the illegal settlement of "Givat Hamatos" and possibly the so-called E1 Area on the outskirts of occupied Jerusalem," said Hanan Ashrawi, member of the PLO's Executive Committee. "However, we believe that the European Union, as well as the governments of these 15 states (Germany, France, Italy, Spain, United Kingdom, Belgium, Denmark, Finland, Ireland, Netherlands, Norway, Poland, Portugal, Slovenia and Sweden) should adopt actionable decisions that would deter Israel from persisting on the path of illegality, impunity, and de facto annexation. Rhetorical opposition has not deterred Israel. In fact, Israel is emboldened to escalate its criminal actions precisely because it is confident that opposition will not move from the verbal to the practical."

The PLO official warned that if implemented, "these Israeli plans would completely sever occupied Jerusalem from its natural Palestinian surrounding and cut the occupied West Bank in half. They would complete the Greater Jerusalem colonial project with the theft of strategic Palestinian land and the physical obstruction of any contiguity of a future Palestinian state."

Ashrawi said, "While the international community is concerned with the 'possibility' of annexation, Israel is implementing its annexation scheme on the ground without any deterrence. This includes the choking siege and silent ethnic cleansing of Silwan, Al-Issawiya, and Wadi Al-Joz (Palestinian neighborhoods in East Jerusalem) byway of home demolitions, systemic violence, and announced wide-scale settlement projects predicated on the displacement of thousands of Palestinians."

She urged that states "must not allow Israel to persist in this cynical ruse. The principle of accountability is undermined and rendered irrelevant when international actors insist on giving Israel a free pass on egregious violations of Palestinian rights and international law."