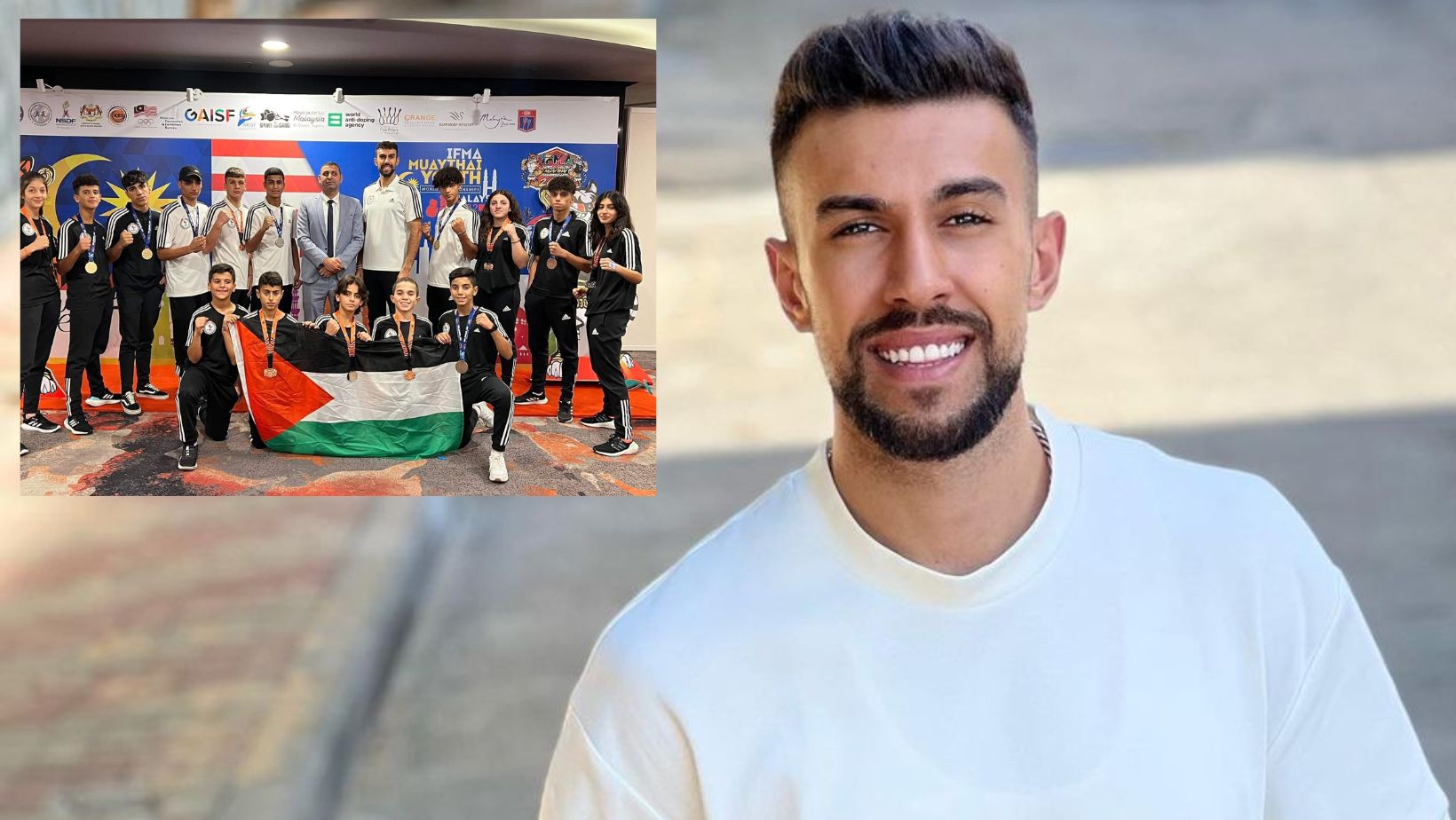 RAMALLAH, Monday, August 29, 2022 (WAFA) – Despite growing popular every day among audiences of all ages, he never thought of himself as an “influencer,” and he doesn’t plan on doing so anytime soon, he rather likes to be called by his students, Coach Ahmad, as simple as that, doing what he loves the most and giving his all.

Ahmad Abu Dukhan, 25, a promising young man from the occupied West Bank city of Ramallah, has been practicing Muay Thai, which actually translates to Thai Boxing, since he was a kid. Having been an essential member of the Ramallah-based Muay Thai club, Fighting Zone, for many years, and a several times winner of numerous worldwide championships, he now serves as the main coach, welcoming generations of young fans looking forward to becoming professional Muay Thai players.

Speaking on the history of the sport, now competed everywhere, Abu Dukhan said that it started off as a mean to defend the kingdom and land.

“Muay Thai is the national sport in Thailand. It started off as a martial art and was first introduced in order to defend the lands in Thailand,” he said. “As any sport in the world, it underwent certain developments, eventually becoming the sport that we know of today.”

Known as the “Art of Eight Limbs”, Muay Thai makes use of eight points of contact, according to Abu Dukhan.

“Muay Thai is a combat sport. It combines the uses of kicks, punches, knees, fists and elbows all together,” Abu Dukhan added. “It is a beautiful sport in my opinion because like I said, it started off as a mean to defend lands, a technique that players can use when defending themselves too.”

In total pride, Abu Dukhan says that the Fighting Zone club, the place where students come to learn about and also practice Muay Thai, and which was established in 2007, is the first of its kind in Palestine to introduce Muay Thai as a professional sport, noting that he was the first kid to practice the sport in 2007. He added that most Muay Thai coaches in Palestine have been a part of the club at some point.

When choosing players from the club to compete in championships, Abu Dukhan argues that putting players in several categories won’t make it a sport anymore. However, he says that in order for players to become professional at some point, a few changes have to be made so they can participate in worldwide championships.

“We have 400 players here and anyone can play Muay Thai but actually 30 of them are truly capable of going to international competitions,” he said. “There are 60 players who are able to compete locally, and the rest are simply looking to find themselves. It’s all about what you want from Muay Thai. If you want to become a professional player, you need to apply some changes to your diet, sleep hours, organize your time, and intensify exercises.”

Abu Dukhan is proud to have represented Palestine repeatedly the way it should be represented in his point of view.

“Whoever represents Palestine should hold the Palestine narrative and message the way Palestinians love to see it,” he argued. “Representing Palestine is important not because Palestine simply has to exist in a competition but also because Palestinians players, despite all the circumstances that we’re going through, and all obstacles imposed by the Israeli occupation, now are able to compete and score.”

“I think we’re over the part where we say ‘we’re honored to have participated’, nowadays, we look for players that are able to complete the competition, score and take home medals.”

Recently, the 15-member Palestinian national team, whose members are all from the Fighting Zone club, led by Abu Dukhan, concluded its participation in the Muay Thai World and Club Championships held in the Malaysian capital Kuala Lumpur winning 14 medals.

In the Club Championships, the national team won three gold medals, one silver, and three bronze, while in the World Championships, it won two silver and five bronze.

“The participation is very important because these young players are the ones who’ll grow up to be professional players at the Olympics,” he says. “What makes me proud is that each player at least played two fights, some even played four and five fights. Each player now knows what their weakness is.”

Abu Dukhan, being the positive person he is and a source of inspiration to his students, says that despite all difficulties that the club may face, “we were still able to go, participate, compete and win.”

“When we go to international competitions, the club does need a doctor, a photographer, a physiotherapist,” he said. “We can’t afford them now because we don’t have enough budget. After a competition, a player could be injured and may require surgery. Also, as players grow, they do need a source of income to start their lives so they go out looking for jobs and simply no longer have time for exercising.”

Abu Dukhan says that when he decided to become a coach, his main goal was to be good; a special one for his students.

“It doesn’t matter if you’re number one or the best; each coach is the best to his students,” he said. “What matters is that you become special; once you’re special, you’re unique. Everybody can become a coach, but not every coach gets to be unique. I want to be creative. I want to think outside the box. This is why I do my best to link current events to sports and I try to convey messages in a way that nobody ever did before.”

“When I first entered the world of social media, my goal wasn’t to be famous but rather to let people know about players who travel, compete, win and return and nobody knows anything about that,” he said. “What helped me is that I’m multi-talented; I sing, I direct. I have several things and I simply put them all together; I have stuff for everyone on social media.”

Besides having a huge passion for sports, Abu Dukhan loves singing and has been singing since he was a little child, adding that he’ll find time to work more on his singing skills. He even added that he wants to start a Fighting Zone Chorus. Abu Dukhan is musically inspired by Arabic classical singers like Umm Kulthum, Abdel Halim Hafez, Mohammed Abdel Wahab, Shadia, Warda, Fairuz, and Sabah.

Abu Dukhan says he doesn’t care about any bad or negative comments that he receives on social media, saying he only blocks users or deletes comments from his social media platform if they offend any of the young players in the club.

“Negative comments are kind of important because I feel like I help people release their anger,” he says. “Comments of any kind help my pages reach more audiences.”