President Abbas at a conference: Jerusalem is not for sale 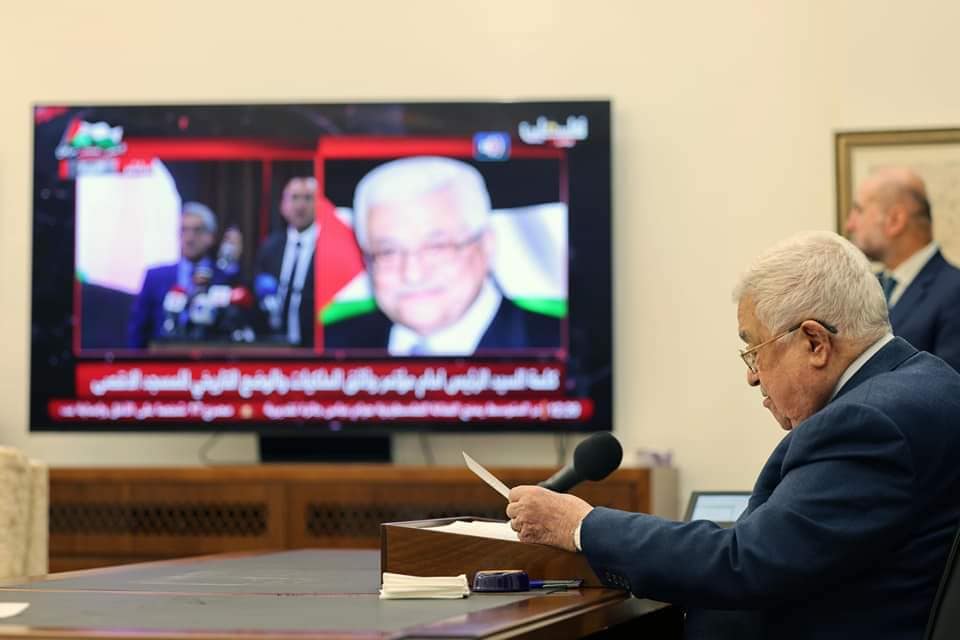 RAMALLAH, Wednesday, June 8, 2022 (WAFA) - President Mahmoud Abbas stressed today that Jerusalem, the capital of the state of Palestine, is not for sale and that all Islamic and Christian holy sites in Jerusalem are Palestinian.

In a speech delivered over the phone at the conference "Property Documentation and the Historical Status of the Holy Al-Aqsa Mosque", which is being held at the headquarters of the Red Crescent Society in the city of al-Bireh, President Abbas stressed that “we will not allow nor accept any changes to this legal and historical status quo (of Al-Aqsa Mosque), regardless of the circumstances.”

He said, “our conflict with the occupation is essentially a political conflict and not a conflict with a particular religion.,” stressing that “Jerusalem and Palestine are not for sale,” and “we have foiled all suspicious projects to liquidate the Palestinian cause, particularly the deal of the century.”

Following is an unofficial translation of the President’s speech:

Greetings to Jerusalem and the people of Jerusalem. Greetings to the blessed Al-Aqsa Mosque and those keeping vigil (al-Murabiton) there. Greetings to the Holy Sepulcher and its steadfast people, and special greetings to you, the participants in this conference, the conference on Documentation Property and the Historical Status of Al-Aqsa Mosque, which comes in the context of our defense of our religious and historical narrative against the defunct and false narrative of the occupation, which has no base, neither in the history, nor in reality, nor in international law.

Your conference that you are holding today acquires great importance from its subject and outcomes in order to consolidate the Palestinian national, religious, legal and historical right while emphasizing that our conflict with the occupation is essentially a political conflict and not a conflict with a particular religion.

Today we stand in our land and our sanctities, defending our inalienable right with our respect and commitment to the historical “status quo” in the blessed Al-Aqsa Mosque and Jerusalem with all its sanctities. We will not allow nor accept any changes to this legal and historical status quo, regardless of the circumstances.

Brothers and sisters, I have now listened to the speech of His Highness Prince Hassan, and how we wished that he would be with us in person at this conference. We and the brothers in the Hashemite Kingdom of Jordan are in one trench in defense of Jerusalem, emphasizing our pride in the Hashemite trusteeship that we established by the historical agreement, which we signed with My brother, His Majesty King Abdullah II in 2015.

Finally, I say, Jerusalem and Palestine are not for sale, and we have foiled all suspicious projects to liquidate the Palestinian cause, particularly the deal of the century. We will not forget the blood of the martyr Shireen Abu Akleh and other righteous martyrs. We will hold on to our positions, our struggle, and our popular resistance until the State of Palestine is established with East Jerusalem as the eternal capital of the State of Palestine.