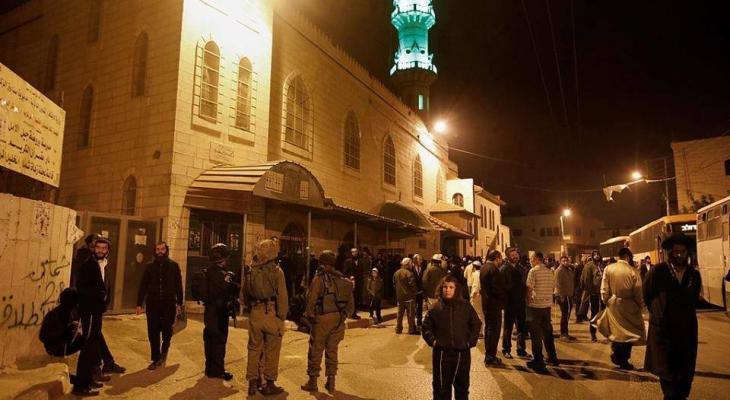 Israeli settlers and soldiers at Nabi Younis mosque in Halhoul.

HEBRON, Tuesday, May 31, 2022 (WAFA) – Israeli soldiers opened fire and injured Palestinians who were protesting an intrusion by extremist settlers into a mosque in the southern West Bank town of Halhoul, reported WAFA correspondent.

He said soldiers raided Halhoul to clear the way for the settlers who wanted to hold rituals at Nabi Younis mosque in the town provoking clashes with Palestinian residents.

The soldiers opened fire at the Palestinians injuring two in the leg with live bullets and others were hit by rubber-coated metal bullets. Many also suffocated after inhaling tear gas fired by the soldiers.

Sources in Halhoul said around 15 bus loads and 20 cars of settlers arrived at the mosque area under heavy army protection. The settlers broke into the mosque, desecrated it, broke its windows, and shot at its minaret while shouting and singing for two hours.

Soldiers broke into nearby buildings as well, including a school and nursery, while others took over rooftops.