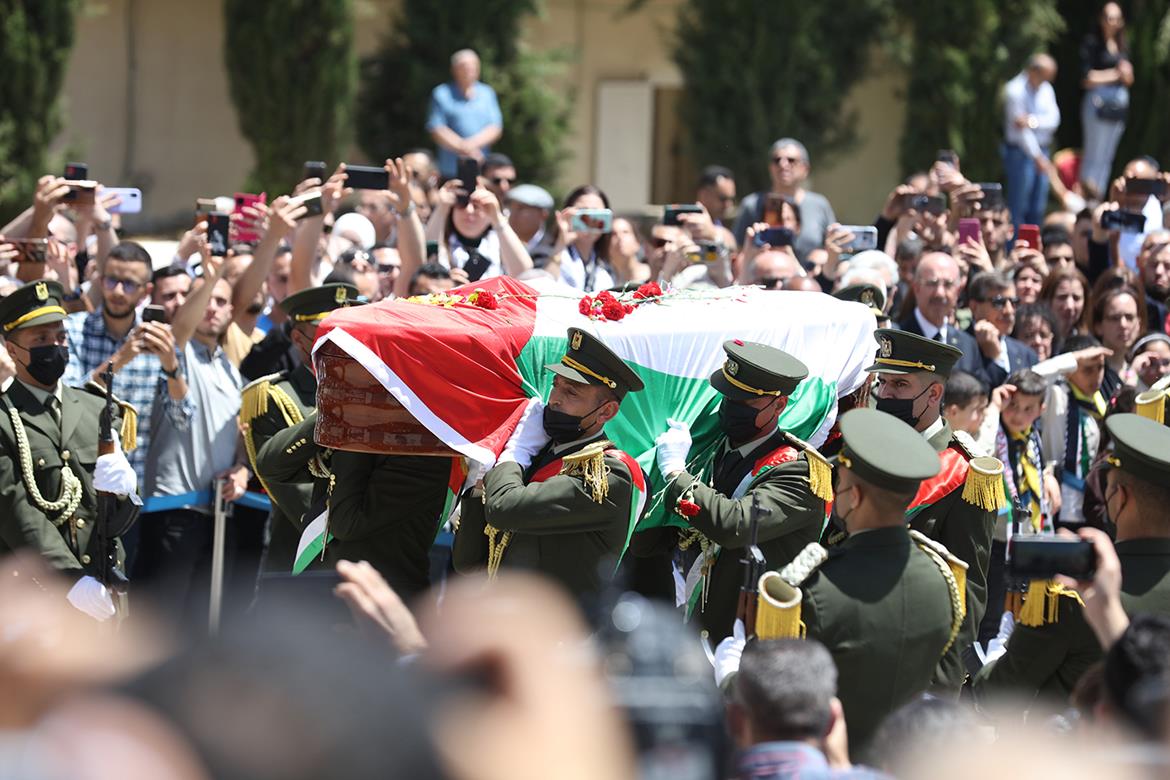 The funeral procession of Al Jazeera reporter Shireen Abu Akleh set off from the Istihsari Hospital in al-Rihan neighborhood and made its way to the presidential complex, al-Muqata‘a, where a grand state memorial was held with the attendance of President Mahmoud Abbas, Prime Minister Mohammad Shtayyeh along with a host of officials and hundreds of mourners.

The honor guard brought the body of the veteran journalist, draped in a Palestinian flag and a press vest, keffiyeh, and flowers, to al-Muqata‘a, where President Abbas and Prime Minister Shtayyeh bid their farewell to her and laid a wreath over her coffin as sad mournful bagpipes were played.

Eulogizing Abu Akleh, President Abbas described her as “a hero who sacrificed her life in defense of her cause and her people. She was an honest and patriotic voice who conveyed the suffering of the mothers of martyrs and prisoners, the suffering of Jerusalem, the camps, the protests and the incursions into towns and villages.”

“We hold the Israeli occupation authorities fully responsible for the murder, and they will not be able with this crime to hide the truth, and this crime must not go unpunished.”

He said that the Palestinian Authority has refused calls for a joint investigation with Israel into the murder of Abu Akleh “because it is they who committed the crime and because we do not trust them,” stressing that “we will immediately go to the International Criminal Court to prosecute the criminals.”

The body of Abu Akleh, a Palestinian Christian and a US citizen, will then be taken in a convoy to St. Joseph Hospital in the Sheikh Jarrah neighborhood of East Jerusalem. She will be buried on Friday in a cemetery next to her mother.