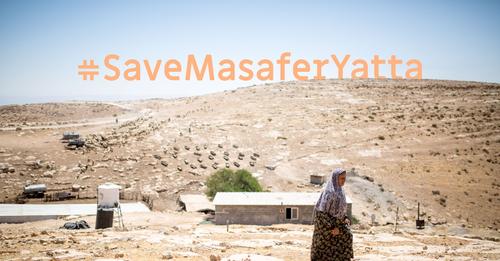 Israel’s High Court ruled in favor of the forcible displacement of some 1,300 Palestinians living in twelve villages or hamlets making up the Masafer Yatta area, which relies heavily on animal husbandry as the main source of livelihood, marking one of the largest expulsions carried out by the State of Israel in recent decades.

The court published the ruling on Wednesday overnight, just ahead of Israel’s so-called “Independence Day”, Israel’s “Independence Day”, which saw the ethnic cleansing of 750,000 to one million indigenous Palestinians 74 years ago and turning them into refugees to establish a Jewish-majority state in Palestine, striking down the petition submitted by Masafer Yatta families against a 1981 military order designating the area Firing Zone 918.

The court’s move effectively leads to the confiscation of over 35,000 dunam of land, where agricultural communities have lived for generations, to consolidate colonial settlement construction in the area.

Masafer Yatta mayor, Nidal Younes, said that the court has ignored all evidence all the facts and evidence submitted by the families over the last 22 years showing that they have been permanently residing in the area since before 1980s.

“The justices have thus proved once again that the occupied cannot expect justice from the occupier's court,” it added.

“The decision, weaving baseless legal interpretation with decontextualized facts, makes it clear that there is no crime which the high court justices will not find a way to legitimize. Employing sugarcoated language, hypocrisy, and lies, the justices once again fulfilled their role in Israel’s regime of Jewish supremacy and paved the way for the crime of forcible transfer to be committed, while reversing reality: the ruling cast Palestinian victims as the “unlawful” offenders, while portraying the apartheid regime as the victim.”

It urged the international community to prevent Israel from forcibly transferring the communities and “make sure, should this crime be committed, that those responsible for it – including government ministers, the military top echelons, and the supreme court justices – will be held accountable.”

Meanwhile, the Alliance for Human Rights, a group of activists allied to document human rights abuses in Palestine, launched an online campaign to save the community.