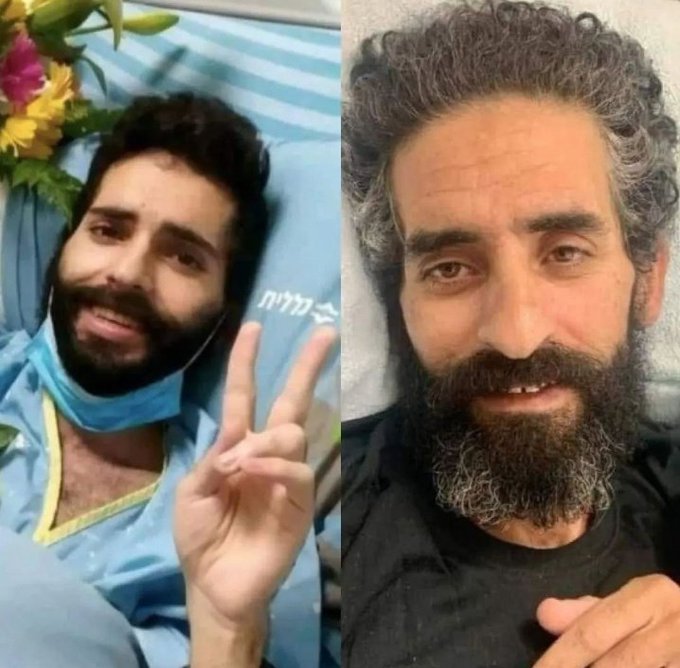 Picture taken of the former administrative detainees, Mikdad Qawasmi and Hisham Abu Hawash, after ending their hunger strike following winning the battle to end their detention.

HEBRON, Thursday, February 24, 2022 (WAFA) – Two Palestinians who went on a very long hunger strike in protest against their administrative detention in Israel without charge or trial, were freed today, according to WAFA correspondent.

Hisham Abu Hawwash, 40, from the town of Dura, south of the southern West Bank city of Hebron, and a father of five children whose hunger strike lasted 141 days, and Mikdad Qawasmi, 24, from Hebron city, who observed 113 days of hunger strike, were freed from the Naqab prison.

However, soon after Qawasmi left prison, he was re-detained by Israelis and held for several hours before he was set free and allowed to return to his home.

Both former administrative detainees returned to their homes to a big welcome by family and friends.

Palestinian administrative detainees in Israel find themselves forced to go on hunger strike to protest their detention for long periods of time without charge or trial. Most of them win the battle and force the Israeli occupation not to renew their administrative detention past the current period.

Currently, some 500 Palestinian administrative detainees in Israel have been boycotting Israeli courts for almost the third month to protest Israeli courts’ failure to provide them with a fair trial since the courts always take the position of the Israeli military prosecutor and extend their administrative detention based on secret evidence.