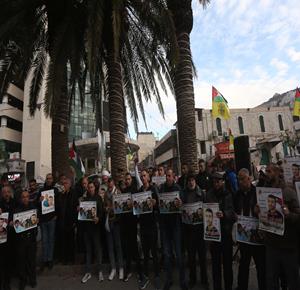 Palestinians rallying in Nablus in support of freedom fighter Nasser Abu Hmeid, who is in a coma at an Israeli hospital. (WAFA Images / Ayman Noubani)

RAMALLAH, Saturday, January 15, 2022 (WAFA) – A critically ill Palestinian freedom fighter held in Israel is in a coma for the 11th day and two others have started their 20th year behind bars, as a former hunger striker was diagnosed with coronavirus infection, and some 500 Palestinian administrative detainees continue for the 15th day to boycott Israeli courts are only some of the news about Palestinian freedom fighters held behind Israeli prison bars.

Nasser Abu Hmeid, 49, from Amari refugee camp in Ramallah, entered into a coma 11 days ago after suffering a severe inflammation of the lungs as a result of bacterial contamination.

Hasan Abed Rabbo, from the Prisoners and Ex-Prisoners Commission, told WAFA today that Abu Hmeid remains critical and is attached to artificial respiration at an Israeli hospital while he is not responding to medication.

He said the commission petitioned Israeli courts to force the Israel Prison Services to provide them with more information about Abu Hmeid’s health and to allow his family to visit him but so far there has been no response.

At the same time, Palestinians throughout the occupied territories have been waging protest rallies in support of Abu Hmeid demanding his release from prison to get proper treatment.

It identified the two as Mohammad Naji Abu al-Rub, from the town of Qabatia, south of Jenin city, and sentenced to 30 years in prison, and Hamza Mohammad Abu al-Haija, from Jenin refugee camp and sentenced to 26 years. Both were arrested in 2003 and charged with resisting the Israeli occupation.

Former hunger striker Hisham Abu Hawash, who went on a fast for 141 days in protest against his prolonged administrative detention without charge or trial before ending it after Israel agreed to end his detention on February 26, was recently diagnosed with coronavirus infection.

His brother, Imad, accused the Israeli hospital, where Abu Hawash is being held while he recovers from the long and hard hunger strike, of intentionally threatening the fragile life of his brother by placing him in a room where corona patients are kept knowing very well that his health cannot withstand a corona infection.

Meanwhile, and in protest of the unfair trials they get in Israeli courts, some 500 Palestinian administrative detainees in Israel continue for the 15th day to boycott the Israeli courts citing their unfair and unjust treatment of the cases of the detainees.

The PPS said in a statement that Israel has been escalating its administrative detention policy to a point it issued 1595 orders last year, some new and other renewed, which prompted the detainees to call for a boycott of the courts in protest of this policy.