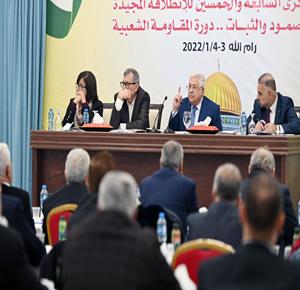 RAMALLAH, Wednesday, January 5, 2022 (WAFA) – President Mahmoud Abbas's ruling Fatah movement said today that the upcoming meeting of the Palestine Liberation Organization’s (PLO) Central Council is pivotal and will respond to the deadlock in the political process.

Fatah’s Revolutionary Council (RC) concluded last night a two-day meeting chaired by President Abbas during which they discussed local, regional and international matters that have a direct impact on the Palestinian struggle for liberation and independence.

"The upcoming meeting of the Central Council is of pivotal importance," said the RC in its final statement issued today. "It will include the Palestinian response to the political deadlock caused by the intransigence, extremism, and the measures of the (Israeli) occupation government and the slowness of the American administration and its reluctance to fulfill its obligations and pledges."

It said that "Fatah is going to submit its vision to reconsider the rule of engagement with the occupation in light of its measures on the ground, including the settler-colonial expansion, the continuous and escalating aggression of the colonialist hooligans under the protection of the occupation army, the demolition of homes, the siege of Jerusalem, the siege of Gaza, the holding of corpses, the piracy of our money and other measures of aggression."

It added: "The current situation has become intolerable and cannot be accepted. Fatah movement is determined to continue to lead its people to change this situation and liberate them from the occupation in order to achieve our national independence."

The statement went on to say that the Revolutionary Council is determined "to escalate and expand the pace of popular resistance, and to involve all its elements in its activities because breaking the audacity of the settlers has become an inevitable necessity. Fatah movement will consecrate all its efforts and its members for this popular resistance, and in all locations, as we seek to form a unified leadership from all the national forces and activate the protection committees in all areas and villages."

It said that Palestine, under the leadership of the PLO, "has given all the time and all opportunities for the success of a serious political process to end the Israeli occupation of the land of the State of Palestine. Despite the commitments and pledges by (US) President (Joe) Biden, and his administration, nothing has been implemented yet, which will prompt us to take specific measures regarding this situation in our Central Council meeting. We demand urgent international action that begins with a ministerial meeting of the Quartet to call for an international conference with powers, with an acceptable timetable for ending the Israeli occupation and enabling our people to achieve their independence and exercise their sovereignty in their occupied state on the land and borders of 1967 with East Jerusalem as its capital."

Fatah also called for starting a strategic dialogue with the European Union, to continue coordination with the Russian Federation and China, and to pay greater attention to communicating with countries in Asia, Africa, and Latin America, calling on the African Union to block Israel’s membership as an observer in the union.

"We strongly oppose all attempts, explicit or indirect, by some countries to recognize the occupation's annexation of occupied East Jerusalem and to open commercial or diplomatic representative offices there. We reject such steps because they are in violation of the United Nations resolutions on Jerusalem," said Fatah, calling on "the international community to fulfill its legal obligations stipulated in the Geneva Convention, to enforce respect for these agreements, and to impose sanctions on the occupying power, which daily violates these agreements."