President Abbas: The situation is deteriorating day after day and a quick rescue operation is required 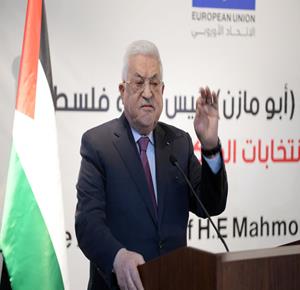 RAMALLAH, Tuesday, November 09, 2021 (WAFA) – President Mahmoud Abbas said today that the situation in the region is deteriorating day after day, and the political issues are deteriorating, and therefore quick rescue operations are required for a political solution.

The President was speaking at the inauguration of the new building for the Central Elections Commission (CEC) in Ramallah held today in ceremonies attended by CEC chairman Hanna Nasir, European Union Representative Sven Kühn von Burgsdorff, the European Union Heads of Mission, members of the Palestinian leadership, and representatives of Palestinian factions. The EU has contributed €6 million to the new building.

President Abbas thanked the EU for its contribution toward the new building and other matters.

"We do not forget the positions of the European Union in other areas, as they stand by the Palestinian people in the two-state vision, and we expect from them more work and pressure so that the political process proceeds to reach a lasting and just peace in the Middle East with the establishment of an independent Palestinian state with East Jerusalem as its capital," he said.

"We and the European Union do not have any differences on this issue, and all we want is that they do their work with everyone, with Israel, the United States and others in order to push the peace process forward, because frankly, we see that the situation is deteriorating day after day and we see that political issues are deteriorating. Quick rescue operations are required for a political solution," added the President.

"We want a political solution: the state of Palestine on the 1967 borders, not more and not less. The Israeli government must realize that if it does not work for peace, it will not enjoy peace either. Peace starts here, and therefore it must understand that this stubbornness and this absolute rejection of the peace process will not benefit it."

"What do they want if they reject the two-state solution? Do they accept one state as I told them in my speech before the United Nations? Do they accept returning to Partition, which is our right granted by the international legitimacy?" He added: "We accept a little from the international legitimacy. So let us take any of the United Nations resolutions and implement them immediately at the negotiating table. But for this government to remain the same as its predecessor, this matter cannot be accepted.

"How long do they want the occupation to remain? We are a people who deserve dignity and a decent life and will achieve democracy through elections in order to be able to hold free and fair elections like the rest of the world.

"We have had enough, and when I say that enough is enough, I mean we have something to say and do. But so that they don't go too far in their thinking, we will not resort to violence, but rather we will resort to the political tracks recognized throughout the world. This is what we want, and this is what we desire."

President Abbas said that there will not be elections if Israel would not allow them in Jerusalem.

"When we say elections, we mean that elections should take place in the West Bank, Jerusalem, and Gaza, and if Israel does not accept holding them in Jerusalem, there will be no elections, because we are not ready to run after Trump and Trump's projects, who decided alone that Jerusalem be united and capital for the State of Israel. Who gave him this right? We rejected it and insisted on the rejection, and we still insist on the rejection.

"East Jerusalem must be the capital of the State of Palestine, and from here we demand the US government to fulfill the commitments it declared, and which it has informed us of more than once, that it will open the consulate in East Jerusalem.

"This is our policy that we want and this is our position, and the Elections Commission is ready and has always been ready to hold elections in the West Bank, Jerusalem and the Gaza Strip."

The President said that he takes this opportunity to tell "our friends in the European Union: You promised us that you would convince Israel, but it was not persuaded. We hope that you will continue your efforts to persuade Israel to allow elections in Jerusalem."

With regard to the reconciliation file, President Abbas stressed, "We are fully ready for reconciliation, but we have one demand which is that we all abide by and apply international legitimacy. If this happens, the process of reconciliation will take place immediately. This is the right and correct way to restore unity and walk the democratic path."

"This is nonsense that cannot be accepted. We cannot allow it to pass. Who said that these organizations or others are terrorists and who decides? The Israeli government has no jurisdiction at all over this land, these cities and this country to decide who is a terrorist and who is not. I say to them to ask themselves who is the terrorist from 1947 to the present day.

"These files are being revealed now and they are talking about and saying how they looted the money of the Palestinian people and looted the land and property of the Palestinian people 73 years ago, and now they are talking about terrorism, and also about their property in Sheikh Jarrah? What properties are they talking about; property since 200 years ago? Okay, 70 years ago I owned properties in all of Palestine. The UN resolution gave me 45% of Palestine, where is it? They took it, they prevented it. I want it. I want my right. I want my land. I want our homes and property that they looted. I want compensation for what happened to us. I want reparations for the dead and the crimes they committed, for the massacres that were committed in Deir Yassin, Qibya, Ain al-Zaytoun, and others.

"If they want to open these files, we open them, but to say that only their word is the dominant one, no, we have rights and demand immediately that the world, Europe and the US to become aware that the situation is no longer bearable, and that the situation has become very difficult. No one can tolerate what Israel is doing, especially since they told us that settlements are illegal and the expulsion of our people from Sheikh Jarrah is illegal, and unilateral actions are illegal.

"Therefore, Israel and the whole world should be aware of this issue and rush it, otherwise the time may pass, and at that time no one is to blame for what he does and we are not to be blamed for what we do or say. We want our rights, we want to build our country and we want democracy to prevail in our country like the people of the world. Is it conceivable that we are the only people on this planet under occupation? Why are we the only people in the world who do not enjoy the right to independence, why?"