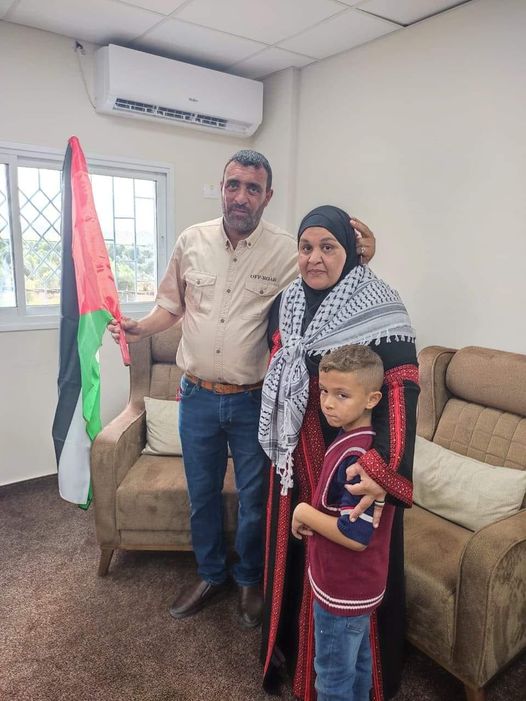 Freed freedom figher Nisreen Abu Kmeil with her husband and one of his seven children after she was allowed into the Gaza Strip to be with her family.

GAZA, Wednesday, 20 October 2021 (WAFA) – Nisreen Abu Kmeil, 46, from Haifa, was today allowed by the Israeli occupation authorities to be reunited with her seven children and husband in the Gaza Strip after a three-day delay following her release from prison in Israel where she completed a six-year sentence for resisting the occupation, according to the Prisoners and Ex-Prisoners Commission.

After her release on Sunday, the Israeli authorities refused to allow her to travel to Gaza where she lived for 20 years to be with her family claiming she owed the state a little bit over $1000 in back TV tax, the Commission's spokesman, Hasan Abed Rabbo, told WAFA.

Abu Kmeil was hosted by different families in the West Bank until finally Israel gave her permission to cross Beit Hanoun/Erez checkpoint in southern Israel into Gaza.

Her permission to return to Gaza was not without conditions, nevertheless. In addition to paying the alleged overdue TV tax, she was banned from returning to Haifa, where she was born and her other family lives, for two years.

Abu Kmeil left behind an 8-month old son when she was arrested in October 2015 and her oldest daughter, Amira, was 11 years old. Her children were not allowed to visit her in prison during her incarceration.

With her release from prison, 32 other Palestinian women remain incarcerated in Israel for their resistance activities, including mothers. Israel is currently holding over 4500 Palestinians in prison, including 200 minors and over 350 administrative detainees.