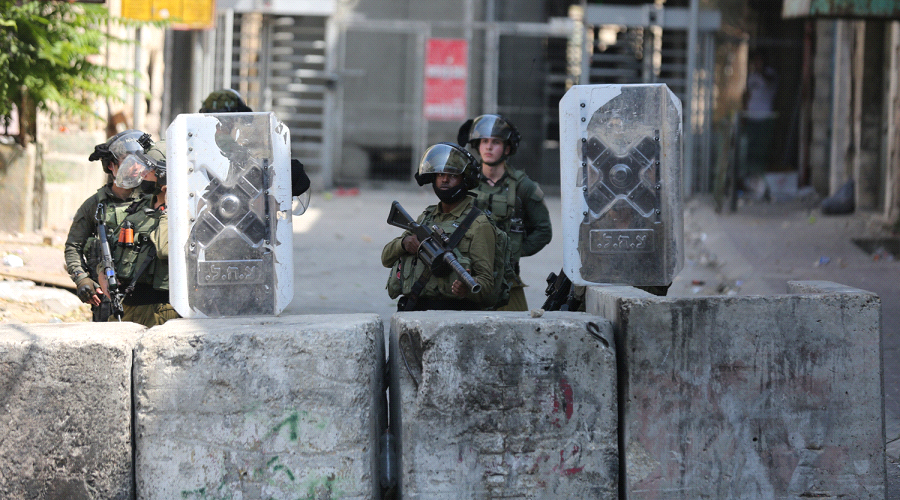 Israeli soldiers manning one of many checkpoints in Hebron.

Raed Tamimi told WAFA that Israeli forces stopped his 14-year-old son, Muntaser, near the Abu al-Rish military checkpoint, west of the Ibrahimi Mosque, as the latter was on his way to his school, searched his school bag and then brutally assaulted him, inflicting bruises in his head.

Attacks on education by Israeli military forces and Israeli settlers in the occupied Palestinian territories constitute grave violations of children’s rights to education and development. These attacks are particularly prevalent in the most vulnerable areas of the West Bank – Area C, the Israel-controlled H2 area of Hebron, and East Jerusalem.

Palestinians of the city face a large Israeli military presence on a daily basis with at least 32 permanent and partial checkpoints set up at the entrances of many streets.

Since the 1994 Ibrahimi Mosque massacre that claimed the lives of 29 Muslim worshippers, Palestinians have not been allowed to access the main al-Shuhada Street and have had their homes and shops on the street welded shut. Meanwhile, Israeli settlers move freely on the street, drive cars and carry machine guns.

Israel has expelled the only international monitors, the Temporary International Presence in Hebron (TIPH), protecting Hebron’s Palestinians from the heavily guarded settlers, one of whom committed the 1994 massacre that triggered their deployment.