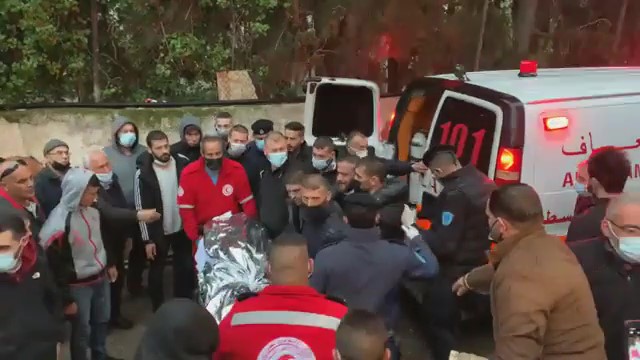 The body of Khaled Nofal arrives at Palestine Medical Complex in Ramallah, in the center of the occupied West Bank, March 26, 2021.

Nofal's body was released by the Israeli occupation military and handed over to his family at Ni'lin military checkpoint, west of Ramallah in the occupied West Bank, after being withheld since February 5 and for no reason.

Nofal, who comes from the village of Ras Karkar in the West Bank, was shot dead by armed Israeli settlers while he was on a tour near his village on the said date. His body has since been withheld by the occupation army ever since.

Israeli occupation authorities have escalated the policy of withholding the bodies of Palestinians killed by Israeli forces or settlers, claiming that funerals of Palestinians had provided grounds for “incitement” against Israel.

Dozens of Palestinians killed by Israeli forces are still withheld in Israeli mortuaries despite calls by human rights groups on Israel to release them.