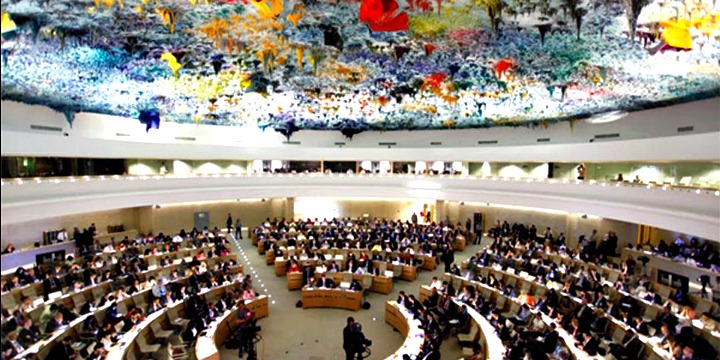 GENEVA, Monday, March 22, 2021 (WAFA0 – The United Nations should take action against Israel's discriminatory policies and compel it to respect relevant international laws on equality and non-discrimination, the Euro-Mediterranean Human Rights Monitor and the Global Institute for Water, Environment and Health (GIWEH), a Swiss international non-governmental organization, said on Friday in a joint statement at the 46th session of the United Nations Human Rights Council (HRC).

Delivered during the general debate on agenda item 9 related to racism, racial discrimination, and xenophobia, the speech said that, in the UN’s history, the Durban Declaration is a significant milestone as it reiterates that equality and non-discrimination are core human rights and that the state is responsible to combat racism and racial discrimination in all its forms.

The two organizations highlighted in the speech, delivered by Euro-Med Monitor Regional Manager in Europe, Muhammad Shehadeh, that since the establishment of the state of Israel in 1948, successive Israeli governments have, unfortunately, chosen the wrong side of history, where they enacted numerous exclusivist policies that discriminate against the Palestinian Arab minority politically, economically, socially, and culturally.

The speech said, discrimination is seen, for instance, in the right to family life, where in 2003 Israel used an emergency regulation to prevent family unification between Israeli citizens and Palestinians in the occupied territories.

The speech added that discrimination also appears in the 2018 basic law that defines Israel exclusively as the nation-state of the Jewish people, formally relegating Palestinian Arabs to second-class citizens.

"The list goes on and on," the speech said.

The two organizations reiterated that Israel’s government has shown serious disregard to calls to end such discrimination and has even attacked human rights groups working to advance equality, which prompted Israel’s leading human rights organization B’Tselem to designate Israel’s control between the Jordan River and the Mediterranean Sea as an apartheid regime.

The speech said, "This concerning reality is inherently unsustainable. It cannot go on forever, and it requires concerted efforts from all member states to this council to bring it to an end."