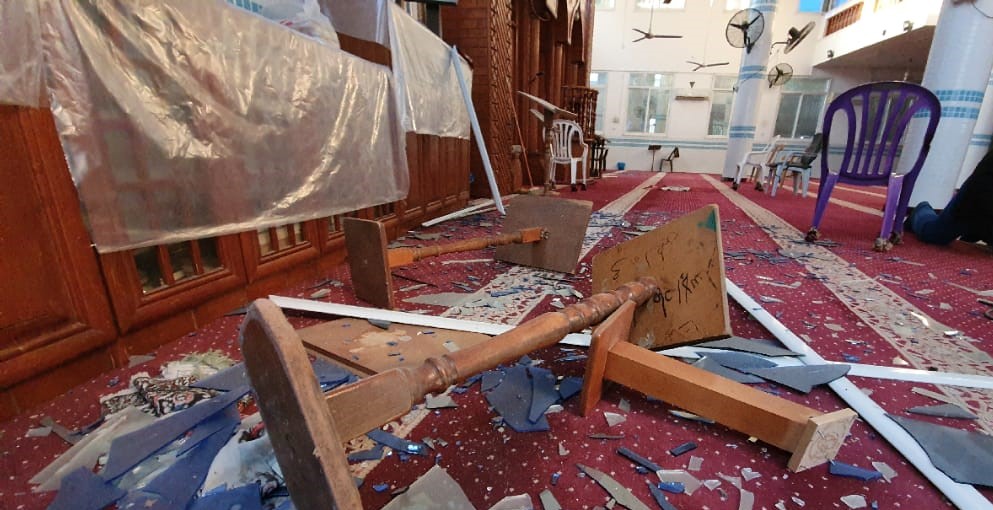 Damage caused to a mosque in Gaza as a result of the Israeli airstrikes.

GAZA, Saturday, December 26, 2020 (WAFA) – A six-year-old baby girl and a youth in his 20s were injured, and a hospital for children, a center for the handicapped, and several homes were damaged early this morning in Israeli airstrikes and artillery attacks on the besieged Gaza Strip, reported WAFA correspondent.

He said Israeli warplanes fired five missiles at locations east of Tuffah neighborhood of Gaza City, injuring the child and youth from shrapnel and broken glass who were reported to be in light condition after they were brought to Shifa hospital in Gaza City, and causing heavy damage to property, including Mohammad Durra Pediatrics Hospital and a center for the handicapped, as well as several homes.

Fire broke out at the location of the airstrike as the firefighters worked all night to put off the fire in the attack that took place an hour after midnight. Electric power was also cut off to several areas east of Gaza as a result of the strikes.

Warplanes and artillery attacked as well several other locations in the center and south of the Gaza Strip, causing damage but no injuries, said WAFA correspondent.

Israel claimed the attacks came after two missiles were fired from Gaza and fell in open areas in southern Israel without causing any damage or injury.