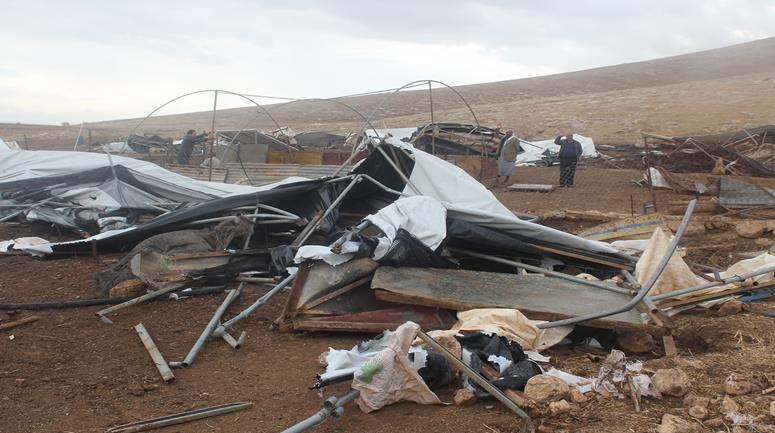 Remains of the Israeli demolition of Khirbet Hamsa al-Fawqa in the Jordan Valley.

Three quarters of the community’s population lost their shelters, making this the largest forced displacement incident in over four years, she said in a statement.

Humanitarian agencies visited the community and recorded 76 demolished structures, more than in any other single demolition in the past decade. The destroyed properties – including homes, animal shelters, latrines and solar panels – were essential to, livelihoods, wellbeing and dignity of community members, whose rights have been violated, said Helle. Their vulnerability is further compounded by the onset of winter and the ongoing COVID-19 pandemic. Some of the demolished structures had been donated as humanitarian assistance.

So far in 2020, 689 structures have been demolished across the West Bank, including East Jerusalem, more than in any full year since 2016; rendering 869 Palestinians homeless. The lack of Israeli-issued building permits is typically cited as a reason, even though, due to the restrictive and discriminatory planning regime, Palestinians can almost never obtain such permits. Demolitions are a key means of creating an environment designed to coerce Palestinians to leave their homes, said the Humanitarian Coordinator ad interim.

Located in the Jordan Valley, Hamsa al-Fawqa is one of 38 Bedouin and herding communities partially or fully located within Israeli-declared ‘firing zones.’ These are some of the most vulnerable communities in the West Bank, with limited access to education and health services, and to water, sanitation and electricity infrastructure.

"I remind all parties that the extensive destruction of property and the forcible transfer of protected people in an occupied territory are grave breaches of the Fourth Geneva Convention. While assuring that the humanitarian community stands ready to support all those who have been displaced or otherwise affected, I strongly reiterate our call to Israel to immediately halt unlawful demolitions," said the Humanitarian Coordinator ad interim.