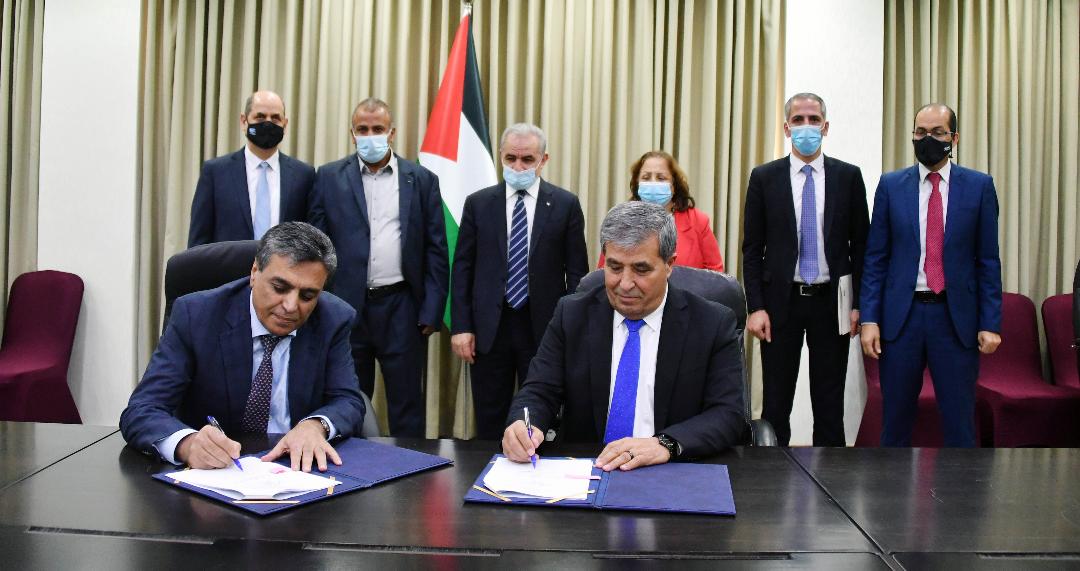 Hani Abu Diad, left, signing the agreement on behalf of the IDB with PECDAR director, Muhammad Abu Awad, and in the presence of Prime Minister Mohammad Shtayyeh and Minister of Health Mai Alkaila. (WAFA Images)

RAMALLAH, Tuesday, October 27, 2020 (WAFA) - The Islamic Development Bank (IDB) today signed at Prime Minister Mohammad Shtayyeh's office in Ramallah and in his presence an agreement worth $6.58 million to support the health sector in Palestine.

IDB representative and director of its Al-Aqsa Fund in Palestine, Hani Abu Diab, signed the agreement with the director of the Palestinian Economic Council for Development and Reconstruction (PECDAR), Muhammad Abu Awad, in the presence of the Minister of Health Mai Alkaila, and the advisor to the Prime Minister for Arab and Islamic Funds Affairs Nasser al-Qatami.

"We extend our sincere thanks and appreciation to the Islamic Development Bank and to the Arab funds that annually provide real and serious generous support to the sectors that are a priority for the government," said Shtayyeh. "This year, the health sector consumed the largest volume of international aid to Palestine because it is important and had to do with the lives of citizens."

Shtayyeh added: "In preparation for the winter season and what is expected with Corona, we are now preparing a field hospital to face this pandemic."