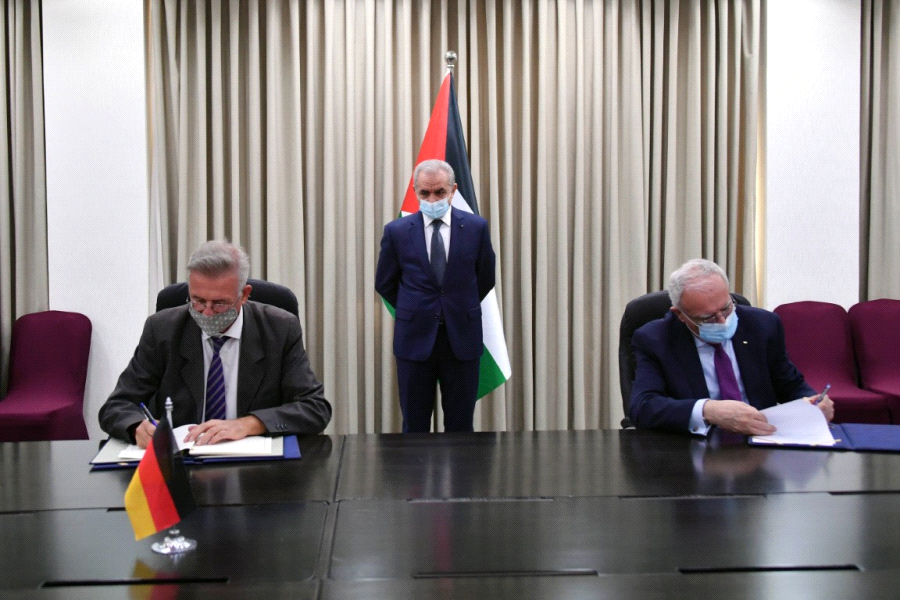 RAMALLAH, Tuesday, September 22, 2020 (WAFA) - Under the auspices and in the presence of Prime Minister Muhammad Shtayyeh, the Palestinian government, represented by the Minister of Foreign Affairs and Expatriates Riyad Malki, and the German government represented by German Representative in Ramallah, Christian Clages, signed today a multi-sector support agreement at a value of 56.2 million euros, according to a statement issued by the Prime Minister’s Office.

The agreement, part of the annual agreements on German-Palestinian development cooperation, has been provided for development projects in Gaza, the West Bank, and East Jerusalem on the direction of which both parties had agreed during the government negotiations in Ramallah in November 2019.

Shtayyeh thanked the German government for its continuous support to the Palestinian people, noting that 27 million euros will be allocated to support the water sector in Gaza.

“This is a message from President Mahmoud Abbas to our people in Gaza; that we are all one nation,” assuring Gazans that they have all possible support no matter what.

He stressed that water is an important and urgent thing for the Gaza Strip, electricity as well and creating job opportunities, and this agreement also comes within the framework of our interest in the issue of vocational training.

“This assistance comes at the core of our priorities in issues related to vocational training and small and medium enterprises, in addition to supporting the standards and metrology institute," said the Prime Minister.

“These projects underline that the Federal Government of Germany remains committed to achieving better living conditions for the Palestinian people”, Clages said after the signing ceremony.

At the center of this year’s commitment lies the joint improvement of economic and social conditions with a focus on strengthening technical and vocational training as well as creating new economic perspectives, according to a press release by the German Representative Office in Ramallah.

Another focus is the construction of the distribution networks for a new desalination plant in Gaza for which nearly 18 million euros have been provided. About one million people in Gaza City and the northern Gaza Strip shall get better access to safe drinking water once the project is completed, it said.

Over the past 30 years, Germany has provided more than 1.2 billion euros for development projects in Palestine. The cooperation focuses on local governance as well as sustainable economic development, with a special focus on technical and vocational training, education and school infrastructure.