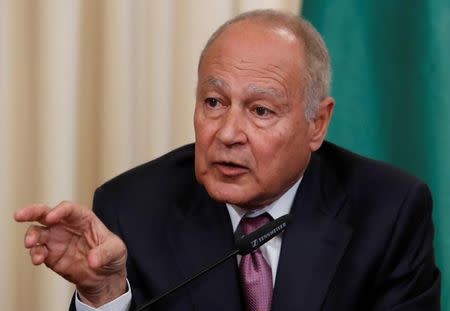 CAIRO, Wednesday, October 5, 2022 (WAFA) - The Secretary-General of the League of Arab States, Ahmad Aboul Gheit, today expressed dismay over statements made by British Prime Minister Liz Truss regarding the transfer of the British embassy in Israel from Tel Aviv to Jerusalem, stressing the Arab League's rejection of any unilateral measures that violate international law and the historical and legal status of Jerusalem.

Jamal Rushdie, the spokesman for the Secretary-General, said in a statement that Aboul Gheit's remarks came while addressing the British Conservative Party conference yesterday in which he called on the British government to follow practical policies and action plans in order to launch a meaningful peace process that leads to ending the Israeli occupation. and the establishment of an independent Palestinian state on the 1967 borders.

Aboul Gheit reminded the British government of the need to adhere to the two-state solution as an agreed-upon formula for the final settlement between the Palestinians and the Israelis, and to refrain from any illegal measures that would undermine the possibility of applying this formula on the ground in the future.