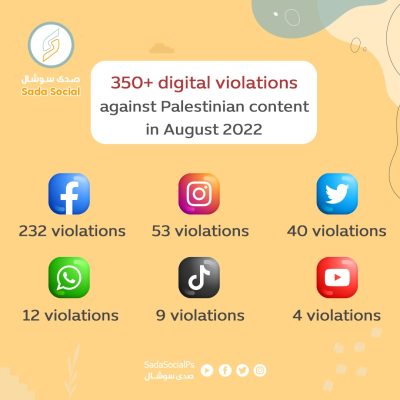 RAMALLAH, Saturday, September 3, 2022 (WAFA) - Sada Social Center, a social media watch group, documented more than 360 digital violations against Palestinian content in August, which included journalists’ and activists’ accounts in the largest number of violations so far this year. These violations increased with the escalation of the extensive Israeli attacks, especially the recent aggression on the Gaza Strip, followed by the Israeli attacks in Nablus on August 9, it said in its monthly report on censorship by social media platforms of Palestinian content.

The violations on Facebook varied between deleting posts, restricting access, preventing posting and preventing the use of some features such as live broadcasts and advertisements, and most of the violations on Instagram were “Stories” related to the Israeli attacks in Nablus, and the recent aggression on the Gaza Strip.

Sada Social has indicated that journalists and media organizations were the most vulnerable to violations as 260 violations were documented against the pages of media organizations and journalists’ accounts, including those whose accounts were completely deleted, due to their coverage of news related to the Israeli attacks, and their transmission of Palestinian humanitarian stories, which cannot be classified as promoting to “terrorism” as these platforms claim.

The most prominent Palestinian issues were violated by social media platforms the stories of those killed in the recent Israeli aggression on the Gaza Strip, such as Gazan child Alaa Qaddoum, 5 years old, and members of the Islamic Jihad movement, such as Khaled Mansour, in addition to any name, photo or video that talked about Ibrahim al-Nabulsi, killed by Israeli soldiers in Nablus, and his mother, and the posts that included a text or a picture of Abu Ali Mustafa, the leader of the Popular Front, on the anniversary of his assassination.

Meta justifies the restriction on Palestinian content as either incitement and praising acts of violence, and it contradicts the list of terrorist personalities and organizations according to their classification, which means hiding crimes against humanity carried out by Israeli occupation, as well as preventing the Palestinian narrative from spreading.

The Center expressed the seriousness of what it described as “deliberate censorship” and “bias” against Palestinians living under occupation while excluding the Ukrainian case from all these standards where the platforms do not prohibit any inflammatory content and praise of violence that contradicts the declared Meta standards.

Sada Social Center also said it got in contact with the administrations of social media platforms about the accounts that have been violated, while it managed to restore about nine accounts of journalists on Facebook and Instagram.

It stressed that it is still continuing to pressure not only towards restoring the deleted accounts and removing restrictions on other accounts but to work to fix these biased algorithms and standards.