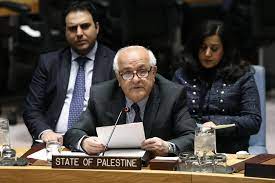 RAMALLAH, Thursday, July 28, 2022 (WAFA) – Palestine has renewed its bid for full membership of the United Nations, according to a Palestinian diplomat.

Speaking in an interview with Voice of Palestine, Palestine’s Permanent Observer to the United Nations (UN), Riyad Mansour, said that the Palestinian leadership, under the chairmanship of President Mahmoud Abbas, has initiated contacts at the highest levels to secure Palestine’s full membership of the UN as a means to safeguard the two-state solution.

The Palestinian leadership, he added, was undertaking political and diplomatic moves in coordination with the heads of several states, including US President Joe Biden, French President Emmanuel Macron, Jordan’s King Abdullah II in addition to members of the UNSC, so as Palestine would not remain hostage to the actions of the Israeli occupation.

Masnour made Palestine’s request as part of his speech during a UNSC session and UNSC members were salted to present their response during the upcoming period.

The Palestinian diplomat stressed the importance that the international community assumes its responsibilities with regard to providing protection to the Palestinian people and preserving the two-state solution given the policy of apartheid implemented by Israel, the occupying power.

He concluded by rejecting the Israeli Ambassador to the UN Gilad Erdan’s criticism of President Abbas during the UNSC session.